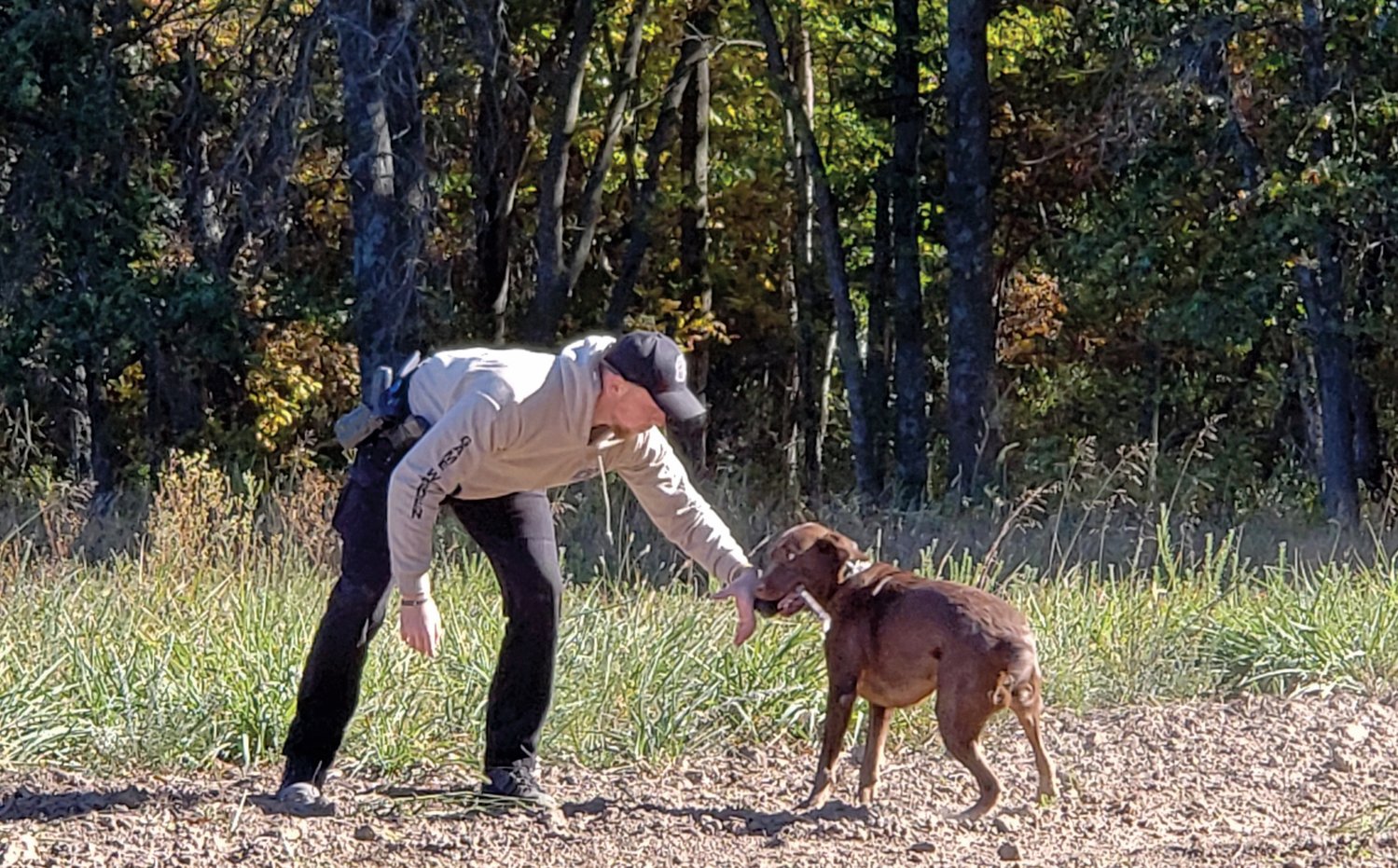 PITTSBURG, Kan. — According to him, Kansas Game Warden Austin Sievert has the perfect job. After all, he gets to hang out outdoors all day long and play with his dog.

Sievert is one of the Kansas Department of Wildlife and Parks’ newest K-9 handlers. With his dog, Apollo, he patrols Labette and Neosho counties, but because his division coordinates with all other state law enforcement, he sometimes finds himself working out of the Crawford County office in Pittsburg as well.

“My office is my house and this truck,” he said.

Sievert explained, “We are state law enforcement that specializes in wildlife, fishing, boating.”

He explained that game wardens have all the same rights and responsibilities as regular law enforcement, plus the specialty of wildlife laws. There is a lot to learn. He has been on the job now for three years; Apollo is a recent graduate of K-9 school, and having his canine partner has made a big difference in his day.

“Probably my favorite thing that I’ve done is the canine thing,” he said. “I kind of see it as a different way of doing things. It’s less awkward when I talk to myself in the truck, because I’m talking to the dog.”

He said he first decided to become a game warden when he was in sixth grade and his teacher did a unit on careers. He had no idea what he wanted to do, but he saw “game warden” on the list of possibilities. His dad said, “That might be a pretty good gig,” so Sievert wrote it down. It took hold, especially the idea of being a K-9 handler.

One of three children in his family, Sievert said he was the only one who planned to stay in Pittsburg and go to Pittsburg State University. He never wanted to leave. But it turned out he was the only one to leave, going to Kansas State University in Manhattan, then moving to South Dakota for his first game warden experience. He thought he would stay there, because he believed he wouldn’t have a chance to become a K-9 handler in Kansas. When a job came open at the Labette office, though, he applied, and here he is, back in his home region, with the siblings who never left.

Sievert and Apollo teamed up this summer and went through K-9 training for nine weeks in Indiana through the state’s National Resource Department of Natural Resources program, he said. Three more regional officers will be going through the program starting in February.

While the program likes to work with puppies between nine weeks old and about a year and a half, Apollo was right at the cutoff line. He was a rescue from Wichita when he was selected. Sievert said all K-9 officers in Kansas are Labrador retrievers because of their personality. Since the dogs are not trained to attack, friendliness is a bonus, as well as high energy. The program chooses dogs with a high play drive, because they love to work. Their main job is finding and recovering evidence and tracking articles.

To demonstrate their skills, Sievert asked a colleague to scent a lure by carrying a cell phone around in his hands. Sievert also fired a gun into the ground and gave his colleague the shell. Both items were then thrown into high grass, while the bird shot was left in place.

When Apollo is released from his crate in the back seat of Sievert’s pickup, Sievert snaps on the official game warden collar. When Apollo hears that click, he knows it’s time to work and immediately begins running in loops to catch the scent. In this case, he ran immediately to the bird shot. Sievert explained that the dog recognizes that the smell of metal and gun oil is foreign, so he knows it needs to be checked out. It also didn’t take Apollo long to find the other items. His reward is play time, which he loves.

Apollo is a state employee, just like Sievert. His benefits include free food and vet care, usually donated, and the right to sleep in Sievert’s bed.

“I was opposed to that,” Sievert said. His lieutenant suggested he allow it because Sievert and Apollo had just a short time to form a working bond before training. Now, it’s a habit.

Summer is mainly fishing and boating, which is fun sometimes, but can get tedious.

“One day it took me about two hours to get around the lake because there were so many people fishing,” he said.

On patrol, he, like Apollo, is looking for anomalies. At the state park on 160 north of Frontenac, he spotted a car that seemed abandoned. Sievert explained that they find a lot of cars that have been stolen and dumped.

He was looking for unusual signs, such as an out-of-state license plate, an empty interior, something slightly off about where and how the vehicle was parked. He called in the license plate, but while he was waiting for a response, another truck drove up with the owner and a friend. The owner said he needed a jump start. Sievert ran their driver’s licenses. Everything checked out, so after making sure they were okay, he went on about his patrol.

Other duties include teaching hunter safety classes, which he enjoys. He also gives fur harvester classes. Game wardens also help with biological surveys, because they are out on the road so much. A scientist at Emporia State University is currently doing a survey of fur-bearing roadkill to help determine the population, so game wardens keep a list of what they see on their rounds.

Both Apollo and his human partner prefer to keep busy, and Sievert likes the investigative side of the job best.

In traditional police departments, there are patrol officers, who might discover a crime and then turn it over to a special investigator or detective.

“We’re our own investigators,” Sievert said. “We patrol, kick it up, and investigate it ourselves. There’s been a couple of pretty good ones.”

He described a case that led to several violations, including transporting wildlife across state lines. Someone bought a deer tag in Kansas and another in Oklahoma because they had dual residency as a college student. They purchased another tag illegally for a friend. Then they shot a deer in Kansas, decided it wasn’t big enough, drove it to Oklahoma, and came back for another Kansas deer.

“I don’t have too many dangerous moments,” Sievert said. “I’ve only had one incident that’s really stuck with me.”

That doesn’t mean he hasn’t had some excitement.

“My very first pursuit was a day when nothing should have been happening,” he said. But the county had a domestic situation, and he was available, so he went to help. “I ended up being the first to get there, and as I got there, the guy was fleeing after allegedly putting a gun to a lady’s head.”

The event ended after a 40-minute pursuit through three counties.

Apollo’s first successful event was a boating incident, where the person was under the influence. When the boater and his wife became belligerent, Apollo barked, which Sievert said he almost never does.

Even though Apollo is a state employee, he’s also Sievert’s pet. When the dog retires, Sievert will have the option to keep him, which he plans to do. Some officers choose not to, but Sievert said, “He’s my buddy.”

Most K-9 officers work about eight to 10 years, Sievert said. In some states, they work until their hips start to go out, but, he added, “We try not to let it get that far. We take really good care of our dogs.”