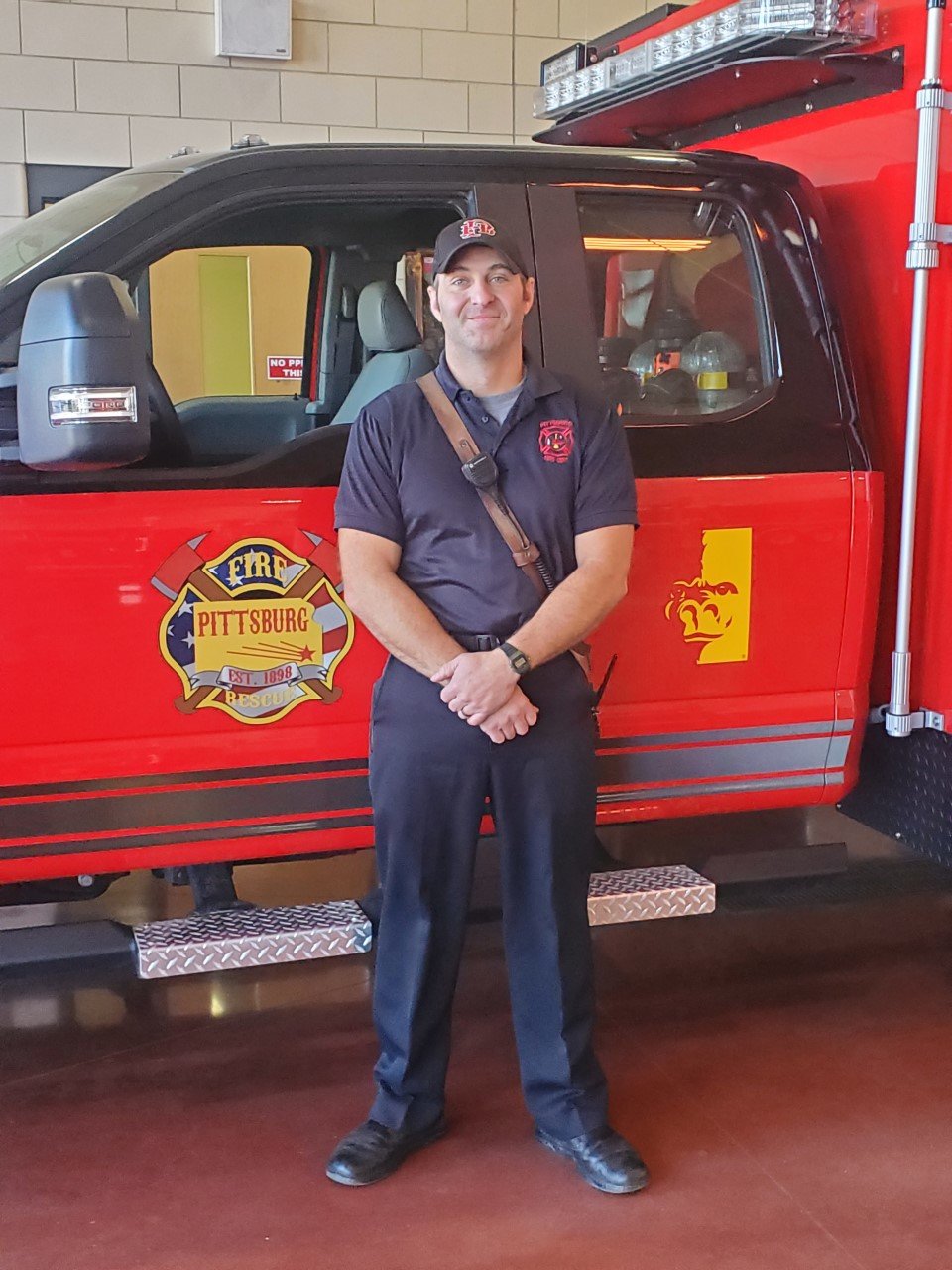 A 17-year veteran of the Pittsburg Fire Department, Cerne began his fire career at the age of 20 while working at a grain elevator in Labette County when his boss asked him to volunteer with the Hackberry-Bartlett Fire Department in 2001.

“I immediately fell in love with the job,” Cerne said. “From there, I did everything I could to get certified. The more certifications I had, the easier it would be to get hired.”

Cerne earned his EMT certification at Labette County Community College and attended night school in Reddings Mill, MO to earn his Firefighter 1 and 2 certifications. While attending Pittsburg State University, Cerne applied for and was accepted by the Pittsburg Fire Department in 2005 at 24 years old.

Cerne rose through the ranks quickly, skipping lieutenant and making captain after only five years until being promoted to Battalion Chief last year.

Raised in rural Labette County, near Altamont, Cerne said he only knew living in the country and that moving to Pittsburg was like coming to a big city. Married with three young children, Cerne and his wife, a Pittsburg native, live on a 20-acre farm just outside of town, a compromise, Cerne said, with his wife who wanted to at least see her neighbors.

Cerne said he has no desire to leave Pittsburg for a larger department in the city because there isn’t the same sense of community. As a Pittsburg firefighter, he said he gets the chance to see the awe in school kids’ eyes when they get up close to a fire truck. Cerne said he likes getting to interact with the people of Pittsburg on a daily basis.

Much of this connection grew out of his camaraderie with other firefighters, Cerne said, an aspect of the job that appealed to him as a young man.

“When the guys that raised me as a firefighter,” Cerne said tearfully, “When they began to retire and seeing those guys leave. It was rough.”

In his years with the department, Cerne said he has seen a lot of changes in firefighting techniques, tactics, and technology. Continuing education is a constant in the department as new technology becomes available, not only in firefighting equipment, but also in automobiles and construction materials, as they change the way firefighters approach a situation, he said.

“The real challenge comes with balancing old tactics with new tech,” Cerne said. “You just can’t sit back and coast and be successful as a firefighter. Things are always changing.”

For the time being, Cerne noted that he is not only fire chief, but is also pulling double duty as a battalion chief. He said he still wants to mentor his crew to his fullest capacity before completely stepping aside as their battalion leader.

Currently, the department employs 33 firefighters and officers, plus a chief and assistant chief. Cerne is looking to fill five positions, and several interviews have been scheduled.

“We have a regularly scheduled testing day on the 16th of every month,” Cerne said. “Testing is done at Memorial Auditorium where candidates can take their physical and written tests.”

Testing can also be done by appointment through city hall, according to Cerne.

Cerne said he looks forward to coming to work every morning. He loves the whole package of being a firefighter, from the community involvement to the adrenaline rush and making a positive difference in someone’s life.

Without hesitation, Cerne said his least favorite part of the job is paperwork.

Excited about the future, Cerne added that he has a young department that is very driven to be good at their job. The department has a lot of exuberance, tempered by a solid officer corps with years of experience, Cerne said.

“The future is going to be a lot of fun.”