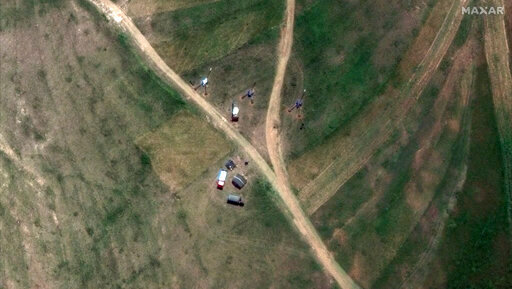 This satellite image provided by Maxar Technologies claims to show M-46 towed field guns and military vehicles positioned in the village of Serha in Eritrea, across the border from the town of Zalambessa in the Tigray region of northern Ethiopia on Monday, Sept. 19, 2022. New satellite imagery of one of the world's most reclusive nations shows military positions inside Eritrea near the border with Ethiopia's northern Tigray region, backing up witness accounts of a new, large-scale offensive. (Maxar Technologies via AP)
Posted Wednesday, September 28, 2022 6:23 am
By CARA ANNA

NAIROBI, Kenya (AP) — New satellite imagery of one of the world’s most reclusive nations shows a military buildup inside Eritrea near the border with Ethiopia’s northern Tigray region, backing up witness accounts of a new, large-scale offensive.

Eritrea has fought alongside Ethiopia against Tigray forces. It rejects allegations that its soldiers committed some of the worst atrocities in the conflict that began in late 2020. Witnesses in Eritrea this month told The Associated Press that people including students and public servants are being rounded up across the nation and sent to fight in the new offensive.

The satellite imagery provided by Maxar Technologies shows what Maxar described as battle tanks, self-propelled howitzers and a M-46 field gun battery in the Eritrean town of Serha, near the border, on Sept. 19. The town is across the border from the Tigray town of Zalambessa, one of the first communities overrun in the war.

Eritrea is one of the world’s most closed countries to independent journalists, and images from there related to the war in Ethiopia are rare.

Last week, Tigray forces accused Eritrea of launching a full-scale offensive along the border in what appeared to be an escalation of fighting that renewed in August after months of relative calm.

Other satellite imagery captured on Monday and shared by Maxar shows military mobilization in the Tigray town of Sheraro, which a humanitarian worker this month described to the AP as being targeted by deadly shelling that caused tens of thousands of people to flee. The worker, like others, spoke on condition of anonymity for fear of retaliation.

The U.S. envoy to the Horn of Africa, who has been pressing the Ethiopian and Tigray sides to stop fighting and hold peace talks, told reporters last week that Washington has been tracking Eritrean troop movements across the border.

“They are extremely concerning, and we condemn it,” Mike Hammer said. “All external foreign actors should respect Ethiopia’s territorial integrity and avoid fueling the conflict.”

Eritrean President Isaias Afwerki, the only leader the country has had since independence three decades ago, remains a foe of the Tigray authorities despite Ethiopia and Eritrea restoring ties in 2018 following a bloody border war. Tigray authorities have bristled at the suggestion made by an African Union special envoy that Eritrea be part of talks to end the current conflict.

The war in Tigray is estimated to have killed tens of thousands of people and left millions in the region without basic services like phone, electricity and banking for well over a year. Independent journalists and human rights researchers are barred from the region.