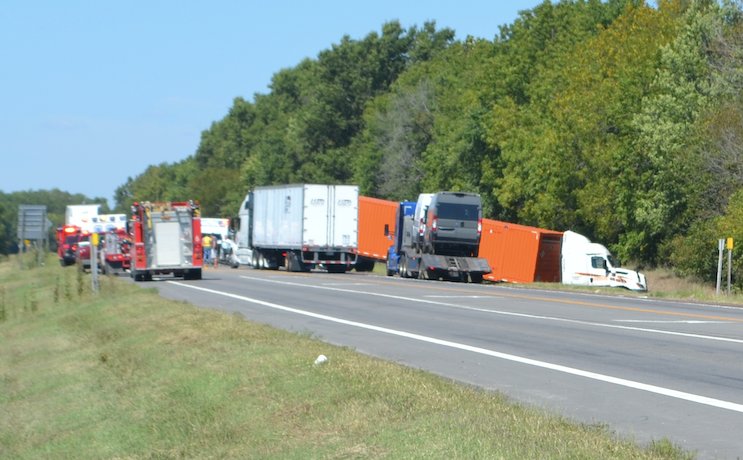 A crash on the Highway 69 bypass early Monday afternoon involved four vehicles and left a semi in the ditch on the east side of the highway, but only resulted in one minor injury, according to the KHP.
DUSTIN R. STRONG / THE MORNING SUN
Posted Tuesday, September 20, 2022 3:00 am
Staff Reports / news@morningsun.net

PITTSBURG, Kan. — One person was injured and a semi ended up in the east ditch of the Highway 69 bypass between Quincy and 4th Street early Monday afternoon, according to the Kansas Highway Patrol.

At approximately 1:11 p.m. Monday, a 2020 Freightliner truck was traveling southbound on U.S. 69 when a 2002 Honda Civic driven by Chadd Logan, 49, of Fort Scott, who was traveling northbound, crossed the center line and struck the semi, which was driven by Shammah Moultire, 21, of Georgetown, South Carolina, according to the KHP crash report.

A 2005 Pontiac Grand Prix driven by Kaylee Denton, 19, of Galena, then struck the rear of the Civic, and the semi collided with a northbound 2018 Ford F150 driven by Joseph Snedden, 34, of Vinita, Oklahoma, causing both the semi and the F150 to go into the east ditch, according to the KHP.

The only person reporting an injury from the crash, according to the KHP, was Logan, who was taken to Ascension Via Christi Hospital in Pittsburg for treatment of suspected minor injuries. All four drivers were wearing seat belts.