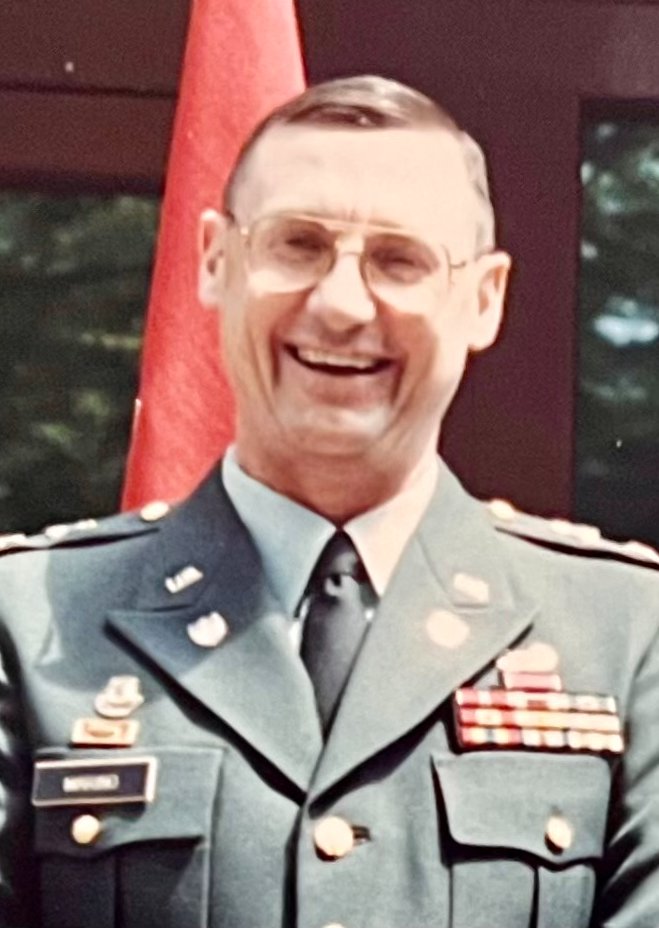 Col. Marino was born in Pittsburg on Oct. 1, 1945. He attended Sacred Heart Elementary School in Frontenac and graduated from Frontenac High school in 1963, where he was a proud member of the Raider football team and was honored as an outstanding graduate.

He went on to graduate from Kansas State College (Pittsburg State University) with both his Bachelor of Science and Master of Science in Industrial Arts Education.

He was commissioned a 2LT in January 1968 and began his active-duty service in the US Army in 1969, thus beginning the career that became his life – serving his country. He felt it was a privilege and a duty to lead young men and women in all ranks to become better soldiers and leaders.

He loved nothing more than being with his soldiers and his young officers not only as their Commander but also being on a sports field playing softball or walking a leg of the Nijmegen March (the largest multiple-day marching event in the world with over 5,000 military participants in uniform walking 25 miles daily and carrying 22 pounds) with his team. He was part of the cadre that put the Tampa Area Instructor Group Army ROTC program on the map nationally when the cadets went on to win the prestigious Warrior of the Pacific Award (now known as the MacArthur Award) in 1978 and 1979.

From his early days as a young 2LT (where he said he learned how to be a soldier and an officer from his First Sergeants and Sergeants Major) to his time as the G1/AG of the 101st Airborne/Assault Division, Ft. Campbell, Kentucky, and his command time in Vietnam and Germany to his retirement at Ft. McPherson, Georgia, he considered himself a soldier's soldier.

Colonel Marino retired from his last military position as the FORSCOM Adjutant General at Ft. McPherson, Georgia in 1996. He then joined the corporate world at Sears Headquarters in Hoffman Estates, Illinois.

He married Janice Varsolona Sept. 21, 1968, and they were blessed with Jason (Julianne) and Erin Heilman (Vince); three grandchildren: Grant Heilman, Abriella, and Emilia Marino; and two "bonus boys" as he called them, Max and Briggs Bent. He loved being with his family for dinners, celebrations, school pick-up, deep sea fishing trips, and every moment shared where he could enjoy being called Nonno or The Colonel.

Visitation is Wednesday, Oct. 5, from 5 to 7 p.m. at Blount and Curry, Terrace Oaks Funeral Home in Temple Terrace.

A Memorial Mass of Christian Burial will be celebrated on Thursday, Oct. 6, 10 a.m., at St. Mark the Evangelist Catholic Church in New Tampa, where he was a member. The family will receive guests following mass. Interment will be at Florida National Cemetery, Bushnell, at 2 p.m.

In lieu of flowers, the family suggests contributions to James A. Haley VA Fisher House, 13000 Bruce B. Downs, Tampa, FL 33612; or the ROTC program at the University of South Florida, or the University of Tampa; or the charity of your choice.

His soldiers expected him to close with these words, which he always said to guide them: DRIVE ON!