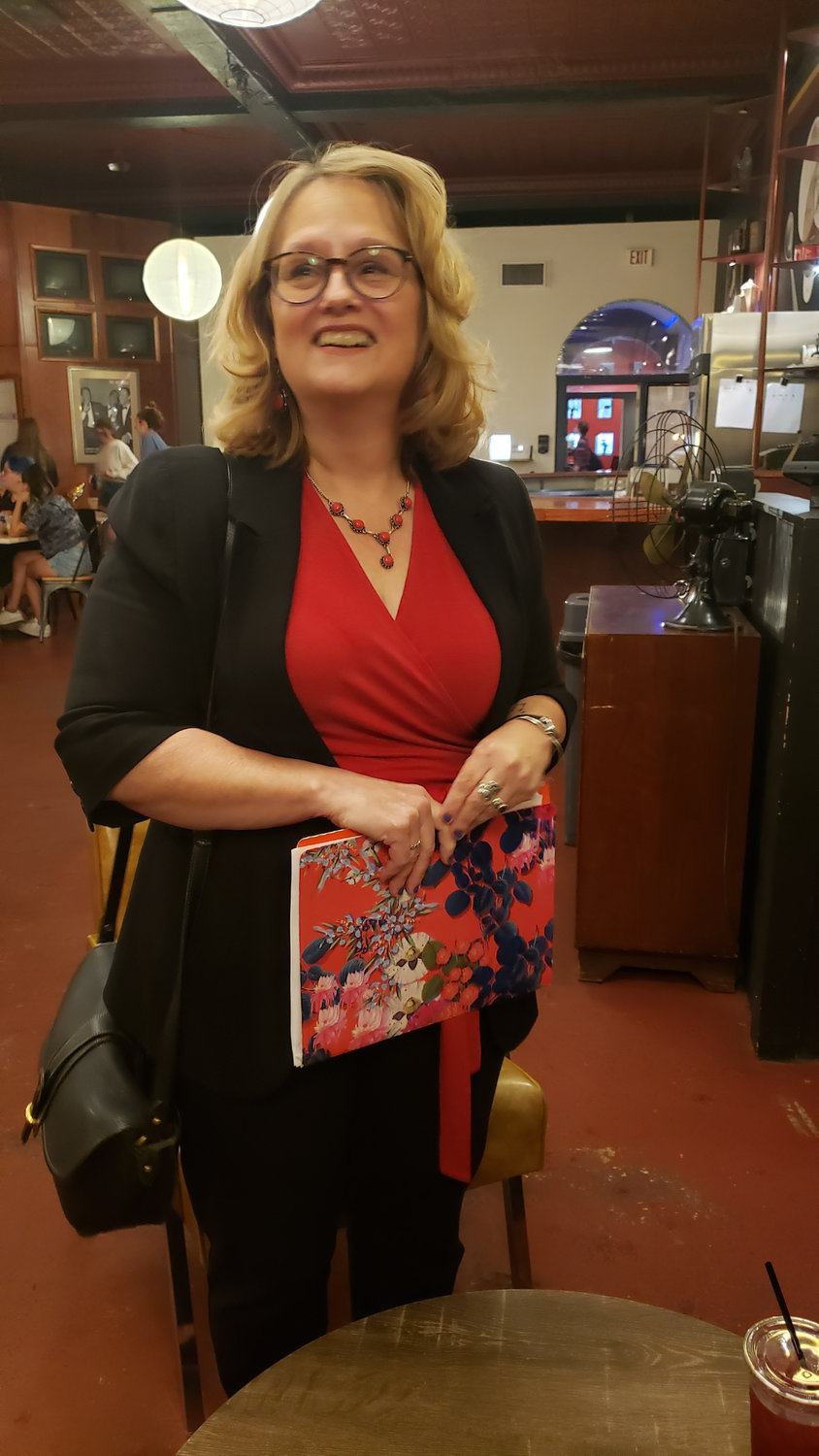 PITTSBURG, Kan. — The poems are a little dark, the fiction even darker. And it’s not just the author’s interest in true crime. It’s her life story.

Lori Baker Martin, on sabbatical from full-time teaching at Pittsburg State University, shared work from a chapbook she is working on at a reading in Joplin Sept. 19. The reading was part of Joplin’s Downtown Poetry series, which is sponsored by PSU’s English Department.

During her sabbatical, she is also polishing a collection of short stories. Her poetry and fiction have appeared in a number of journals, including Prick of the Spindle, The MacGuffin, The Little Balkans Review, Room Magazine, Grass Limb, The Knicknackery, and The Maine Review.

And then there’s that novel. She says she has been working on it for 10 years. The book is set in the Ozarks, and her research into Ozark folkways has also made it into her poetry, including a poem about the magical uses of antimony that she read Monday night.

“It’s becoming my emotional support novel,” Martin joked, because it’s been by her side for so long.

“I realized it needs another point of view, so I’m adding that now,” she said, explaining that that means changing the whole structure of the book. “It’s frustrating, but I think it’s what the novel needed.”

Set in pre-Civil War Missouri, Martin said the book, Jubal in Arcady, follows the points of view of three characters. Jubal is a young white man who was born to privilege in the South. Effie, his wife, is an Ozark witch, and Halo is a formerly enslaved man who is now part of the Underground Railroad. Each of the characters faces questions about the definition of freedom and what it means for their lives and the lives of those they love.

Like her novel, her poetry often has a somber tone.

“I’m afraid my poetry is depressing,” she said. “It’s a little dark.” But there’s a reason for that. “I was writing almost all of these through a very dark period of my life, so it makes sense.”

She explained, “Within a very short period of time, I lost my dad, my husband, my brother, my brother-in-law, and two very close friends — in, like, a year and a half.”

Martin’s husband, Jim, died of Amyotrophic lateral sclerosis, or ALS, also known as Lou Gehrig’s Disease, a progressive nervous system disease that gradually robs the person of all function. She was his full-time caregiver for the five years between his diagnosis and death, as well as working full-time and driving back and forth from their home in Coffeyville to her job, first at Independence Community College and then at PSU.

“I just feel like I had a black cloud over me,” she said of the difficult time. “That was exhausting.”

The last two years of his life, Jim needed full-time care, and family stepped in to help. Martin also had help from hospice and a nurse’s aide that came to the house daily.

“There was a lot of help, but I was still doing most of the primary care,” she said.

His death was hard to take in many ways, one of which was losing her primary fan.

Martin said that she had always loved to read and her parents, although very poor, encouraged that love. They always allowed her to buy books from the annual school book sales as long as she would read them, and she was devouring the classics by third grade.

In high school, a teacher praised her writing, and she later worked as the crime reporter for The Coffeyville Journal, also serving as editor there for a while.

“I like that kind of writing a lot,” she said. True crime stories still find their way into some of her poems.

But when she had the opportunity to go to college, she decided to major in education with the goal of becoming a gifted education facilitator.

It didn’t take long for her to find her niche in the creative writing program, however. She enrolled in the fiction writing class taught by Professor Kathy De Grave.

“I remember her taking me aside and saying, ‘Lori, you’re really good,’” she said. And Martin realized that all she was thinking about was what she was doing in that class, so she switched majors to English with an emphasis in creative writing. She earned both her BA and MA at Pittsburg State.

The next step was to earn a Master of Fine Arts, which is considered a terminal degree in creative fields like writing, art, and music.

She applied to five programs, including the prestigious University of Iowa Writers Workshop, but she said she didn’t really expect to get accepted to any of them.

“I applied to Iowa because I felt I had to,” she said.

Some of her peers had been accepted to various programs, and she was resigned to missing out on the opportunity, when she got a call from the director of the IWW.

Jim happened to pick up the phone, and Martin recalls that as she answered, “Jim stood in the doorway and watched my face. He started crying because he knew what that meant to me.”

In the end, she was accepted to four of the programs she’d applied to, and wait-listed for another, but the decision was an easy one.

“I was a Truman Capote Fellow at Iowa,” she added. “It meant more money, for one thing, but it also meant that I didn’t have to teach if I didn’t want to, leaving more time for writing. But I did teach in the last year because I wanted to say I taught at Iowa.”

As it turns out, she said, “It was a really useful skill to have.”

Back at Pittsburg State, it seems she has come full circle. Her former professors are now her colleagues.

Of De Grave, she says, “Now we’ve been good friends for quite a while. It’s funny to make that shift.”

And she’s making the shift in the other direction as well, as former students become friends. In fact, it’s the students who bring her joy in her teaching career.

“They’re the reason you get excited,” she said. “There’s that student who you see that spark in, that brilliance, and they get better.”

But it’s not just the talented ones, Martin said.

“They don’t have to be the brilliant ones for me to love them. The enrichment that writing gives, what it does for their souls, that’s amazing to me.”

It sometimes makes her job a little harder, though. Each semester, professors receive written evaluations of their courses. Martin said sometimes the evaluations from creative writing students are the harshest.

“It’s because you’re dealing with their souls,” she said.

Right now her life is complicated by the fact that her adult son and teenage grandson live with her, along with her own dog, Novella, and two grand-dogs. Another son lives in New York and her daughter is in college.

And of course the thing about grief is that it never completely goes away. Even years later, when you think you are doing well, she said, “it catches you unawares.”

And her more recent poetry is getting a little lighter, she said, even though her fiction remains fairly dark. She has been known to say that literary fiction, as opposed to popular genres like romance, is almost required to be depressing.

But literature is meant to show the reader that there is hope, even in the darkest of circumstances, something Martin understands in her bones.

“We’re all suffering,” she said. “It is good to extend a little grace to each other.”