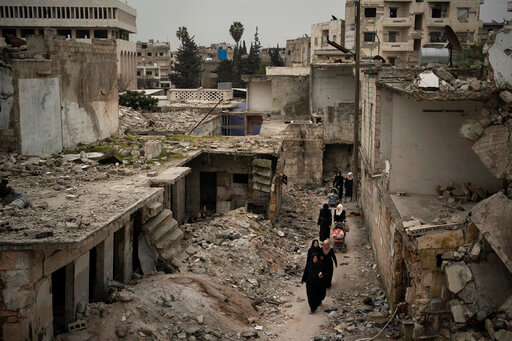 FILE - Women walk in a neighborhood heavily damaged by airstrikes in Idlib, Syria, March 12, 2020. Syrians in the last major rebel stronghold in the war-ton country are living in fear of the effects of Russia closing down the only border crossing into the northwestern province of Idlib. Aid agencies warn that if Russia vetoes the resolution that would maintain two border crossing points from Turkey to deliver humanitarian aid, food would be depleted in Idlib and surrounding areas by September, 2022, putting the lives of some 4.1 million people, at risk. (AP Photo/Felipe Dana, File)
Posted Friday, July 8, 2022 12:02 am
By EDITH M. LEDERER

UNITED NATIONS (AP) — The U.N. Security Council has called a meeting for Friday after having to put off a vote on extending humanitarian aid deliveries to rebel-held northwest Syria from Turkey when no compromise could be reach on how long it would run.

Russia, one of the council's five members with veto power, insisted that the extension be for only six months, while many other council members, the U.N. secretary-general and more than 30 non-governmental groups pushed for another year-long mandate.

Though another council session was called for Friday, it was unclear whether there would be further consultations or a vote.

Closed discussions among the 15 council members continued into Thursday evening but failed to bridge differences between the original draft resolution by Ireland and Norway to extend cross-border deliveries for 12 months and a rival Russian text calling for a six-month extension, with a new resolution needed for a later six-month extension.

“We’re working on getting a basis for consensus,” Ireland’s U.N. ambassador, Geraldine Byrne Nason, said after Thursday’s meeting. “No one in that room wants to be divided on an issue of such importance, but we have more work to do. And we’re going to get working now, work overnight and hope to be back in the morning with the solution.”

Russia’s deputy U.N. ambassador, Dmitry Polyansky, said there is 99% agreement on a resolution, but he said Russia insists on a new resolution after six months.

Byrne Nason, asked whether there was any way around the Russian demand, replied: “We’re working on it overnight.”

The U.N. said last week that the first 10 years of the Syrian conflict, which started in 2011, killed more than 300,000 civilians — the highest official estimate of civilian casualties. Northwest Idlib is the last rebel-held bastion in Syria and a region where an al-Qaida-linked militant group, Hayat Tahrir al-Sham, is the strongest.

Russia, a close ally of Syria's government, has repeatedly called for stepped up humanitarian aid deliveries to the northwest from within Syria, across conflict lines. This would give Syrian President Bashar Assad’s government more control.

In early July 2020, China and Russia vetoed a U.N. resolution that would have maintained two border crossing points from Turkey for humanitarian aid to Idlib. Days later, the council authorized the delivery of aid through just one of those crossings, Bab al-Hawa.

In a compromise with Russia, that one-year mandate was extended on July 9, 2021, for six months, with an additional six months subject to a “substantive report” from U.N. Secretary-General Antonio Guterres. This was effectively a year-long mandate because a second resolution wasn’t needed, and that mandate expires this Sunday.

U.N. spokesman Stephane Dujarric called cross-border aid critical for men, women and children in the northwest and stressed the importance of long-term planning, including to costs.

“In 2021, we had 800 trucks of cross-border aid go through each month, consistently reaching about 2.4 million people,” he told reporters Thursday. “The number of trucks that crossed in the calendar year, from January of this year to June 30th of this year, was 4,648 trucks.”

The U.N. also carried out five deliveries across conflict lines last year and so far this year with about 2,529 metric tons of assistance including foods and health supplies, he said.

Russia’s Polyansky said he wasn’t certain what would happen Friday, but U.S. Ambassador Linda Thomas-Greenfield told reporters, “Tomorrow we’re going to vote on a resolution and hopefully that is a vote that extends the resolution for 12 months.”

Thomas-Greenfield, who recently traveled to the Bab al-Hawa crossing, added: “A six-month resolution does not provide the certainty and the confidence that the Syrian refugees require and NGOs require in order to continue to plan for and provide for support.”

“Six months ends in January, in the middle of winter, the worst time possible,” she said.

If no compromise could be reached, the draft resolution by Ireland and Norway would be voted on first. If it failed to get nine votes, or was vetoed by Russia, the Russian resolution with a six-month extension would then be put to a vote.