TRUE STORIES — Born on the 4th of July 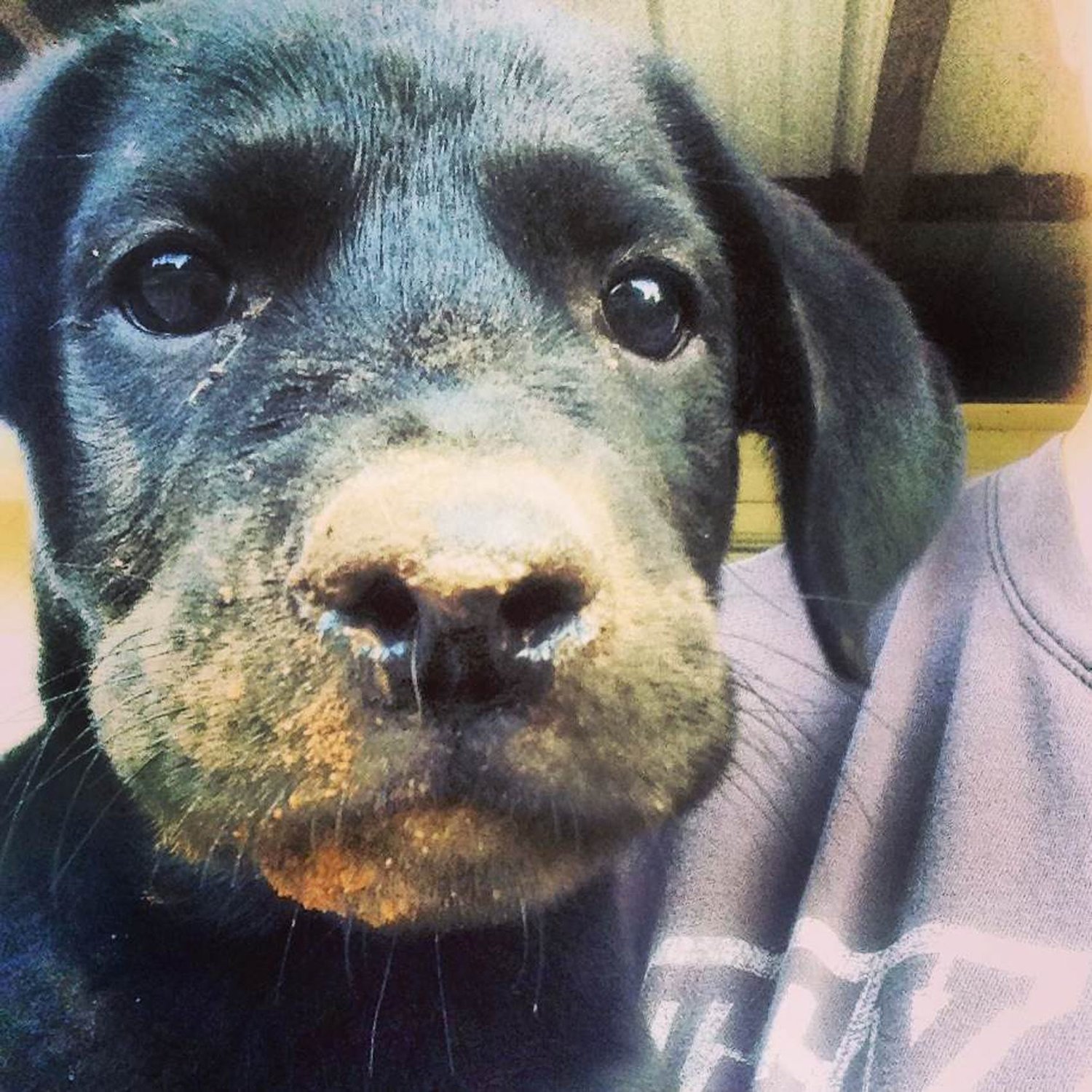 In late September, 2013, Linda and I were sitting on our front porch glider when a pickup rolled up and the daughter of a friend strolled across the brick street and said (with a very mischievous smile), “I just thought you might like to meet him.”

The "him" being a goofy looking, liquid-eyed Lab puppy with mud all over his snout she’d shown us a picture of an hour earlier at a Stilwell Hotel program.

Within the hour I was in the dog aisle at Walmart buying puppy chow, a bowl and a collar — which I tossed into the shopping cart next to a baby gate I got from the kid section.

Speaking of Walmart, picture this: a young girl is holding a kitten as she leans out over the curb a foot from Broadway traffic in front of Walmart on a very hot day in August.

Now envision a woman stopping to express her concern for the girl and the kitten getting too close to the road as the girl’s mother tells her they have to give them away before they go home because her father-in-law said that he’d drown any that they brought back.

The woman looked in the box and saw not only two more un-weaned kittens, but also a tiny black smudge of a puppy; a black Lab — also not old enough to be on its own.

So she pulled out her cell, called her daughter and described the situation: heat, curb, girl, traffic, kittens, Lab, drowning.

The woman didn’t make it to Walmart to shop that afternoon. After her daughter heard the story, she told her to immediately bring the whole menagerie of waifs to her.

So, when people say, “That sure is a good-looking dog, J.T. Where’d you get him?” I reply matter-of-factly, “Walmart.”

We named him Arlo (after Arlo Guthrie) and nicknamed him "the Labradorian." Though, as a puppy, he sometimes spooked when he heard loud noises, it wasn’t until the following 4th of July that we learned how terrified he was of fireworks, to the point of cowering if he was inside — or running away if he was outside.

Counting back from his approximate age when he was rescued, we figured the reason fireworks scared him so much was that he was born on, or around, Independence Day.

But, over the years, we come to see his birthday more as Interdependence Day, as he is instantly in a reciprocal relationship with anyone he meets — sometimes with the deep, compassionate look in his eyes; others with his nuzzling and love licks; others with a friendly bark.

He connects me to others as well — when he barks a "good morning" to a lady on her front porch or kid headed for the bus on our walks; a "thank you" to the drive up bank teller or KFC worker for a treat. Or sings his part in our duet of “How Much Is That Doggy In The Window?”

On our morning walks over the past year the Labradorian’s been stopping at street or alley intersections to give me certain look. One that I’ve discovered means, “I want to go a different way.”

I’m not sure if this is because he’s wants to see some new scenery or scout for new food sources as he, like all Labs, is drawn by his DNA to find and swallow anything remotely edible.

Nevertheless, the result has been walks north to Lincoln Park and east to Broadway to compliment our old groove south to Lakeside Park and west to Georgia Street. Even on the old route he sometimes leads me down a different alley or street where I see the neighborhood from a new perspective and make serendipitous discoveries.

Speaking of serendipity, as Arlo, Linda and I turned off the WATCO walking path on Wednesday, he held the leash east on 3rd Street instead of turning south toward home on Chestnut. “He wants to go straight,” I told Linda, so we followed.

Two blocks up we came upon a toddler wandering in the middle of the street. No adult in sight. Linda scooped him up and we knocked on doors until we got him placed with his neighbors. Had we not come along the boy could have easily been run over.

Coincidence? Maybe. Or maybe Arlo’s so in touch with interdependent energy that he unconsciously drew us to the lost child.

Either way, I plan to keep following Arlo’s lead as he’s drawn me to a whole new perspective on the benefits of following rather than leading in general.

I warn against becoming naïve in the practice of following your dog, though, as you are certain to rescue many more overturned trash receptacles than lost children.

J.T. Knoll is a writer, speaker and eulogist. He also operates Knoll Training & Consulting in Pittsburg. He can be reached at 620-704-1309 or jtknoll@swbell.net

This article originally appeared on Morning Sun: TRUE STORIES — Born on the 4th of July