The future of PSU 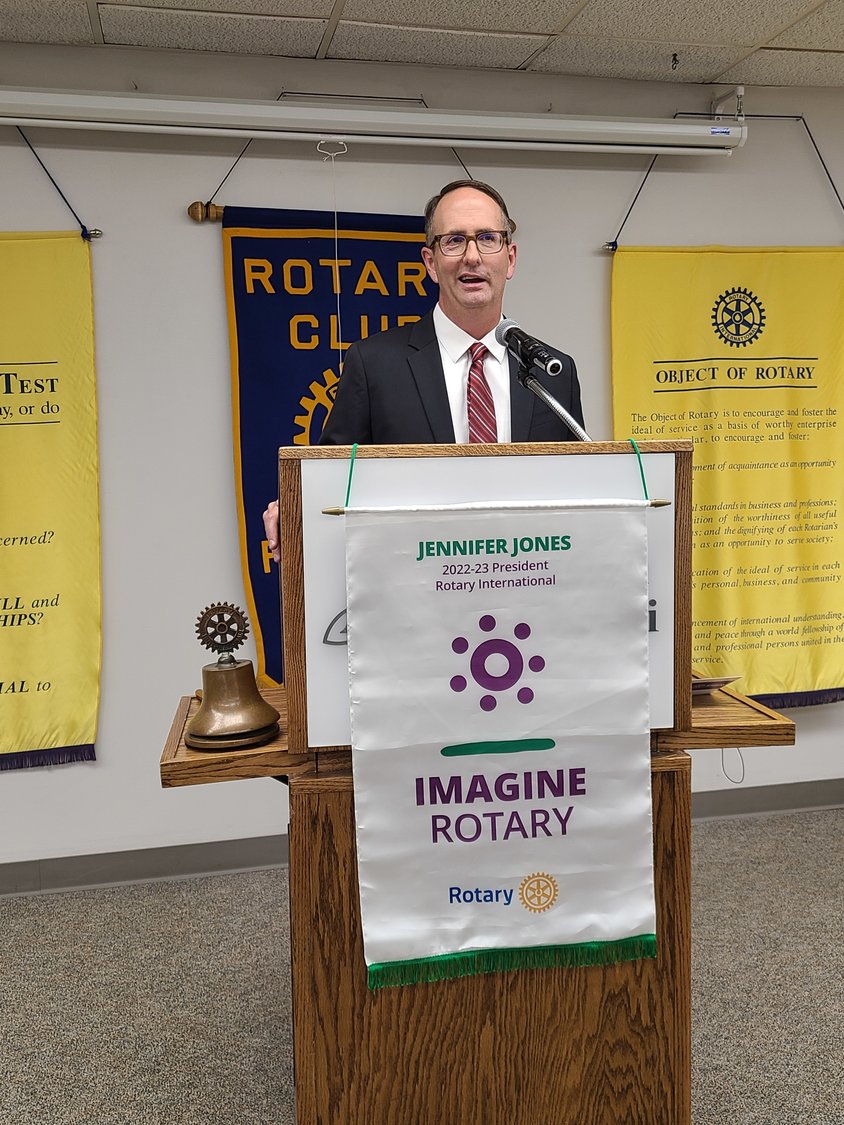 PITTSBURG, Kan. — After being on the job for 88 days, Dr. Daniel Shipp, the 10th president of Pittsburg State University, visited with the Pittsburg Noon Rotary Club on Tuesday to discuss plans he has for the university.

The Pittsburg Rotarians often invite guest speakers to their meetings, which are every Tuesday at noon, as a way to continuously showcase members of the community. Guest speakers range from students involved in Pittsburg High School’s Launch program, to PSU coaches, musicians and many others. This week, the Rotary members were able to hear a little about Dr. Shipp and how he has interacted with the college and community so far, as well as his ideas for the future of PSU.

One story Dr. Shipp told the Rotary members was about how he was asked to speak to the PSU football team before their first game, and he told the players that their catchphrase “Welcome to the Jungle” isn’t quite right.

“And you could have heard a pin drop,” Shipp said. “They were like, ‘Who is this new guy with the tie on trying to talk to us about our theme song? What are you talking about?’ I said, I don't think it's right. Take it from somebody from the outside. I think it's more appropriate to say ‘Welcome to the only place in Kansas that knows anything about championship football.’ And they jumped up and down.”

Dr. Shipp said he has spent the past 88 days learning about the community and the university in different ways.

“What you end up finding in kind of these moments in time, during the transition, is that it’s a chance to reflect and really learn about what our pride points and our pain points are as a community and as an organization,” Shipp said. “So we're going to spend the entire fall semester digging into it, and try and understand what our opportunities are moving forward. And then rolling into strategic planning. That sounds sometimes very cold and shallow, but strategic planning is the lifeblood of what we do. And so we have a lot of work to do around enrollment. I think we all understand that and what it means to the community and the campus. But it's tough to jump into planning work until you build a base of education. So that's what we're doing together.”

He said one of the issues he saw is that PSU’s Kelce College of Business is in a building that is 100 years old.

“When you're talking about enrollment for university or college kids, there’s two big propellers financially,” Shipp said. “Typically, your college of education and it’s typically your college of business.”

He pointed out that Wichita State University just opened a beautiful new facility for its business department.

“Our faculty deserve better, our students deserve better, and we've been raising funds for about 10 years and got about a fourth of the way there with the current concept,” he said.

Shipp said he wants to get a “plan B” in place so that PSU can open a new business facility in three years and said it is necessary if the university wants to keep a good enrollment level.

“We are making sure it is a top priority,” he said.

He said he also wants to build the university’s scholarship packages so that they will be consistent for a four-year degree, to attract more students.

“It's not just about price,” Shipp said. “It's the value of a degree, the value of a residential college degree. Some of this work we're doing in the transition teams this fall is to really unpack that. What's distinct, what's valuable, what's unique about our educational recipe? And so we need to understand that and invest in that.”

Shipp said another thing that might interest those in attendance at Tuesday’s Rotary meeting is that only 50 percent of students at PSU graduate in six years, and the rest do not.

“So it's half of the students that start that don't finish,” he said. “They leave disappointed, disenfranchised with dollars that they owe, and they're out of the game. That's a big issue for all of us.”

Shipp said he got into education because his mother helped start a library in their small town, and that she used to tell him to go to school so he could leave every place a little better than when he found it.

“But if you leave disappointed and out of the mix, and you don't have a career, but you owe money, what's that say?” Shipp said. “We have too many people who are getting left out and getting left behind. That creates all kinds of challenges and opportunities for us in society. So I don't need to preach to this group, because this group is centered on some of these issues. But we have to do better, all of higher education has to do not just a little bit better. I think that if we enroll a student we enroll a graduate.”

“Imagine that in terms of being able to share that with the region,” he said. “How competitive are we, to say, ‘Come to Pitt State, and you get two degrees for the price of one.’ And it does right for the state of Kansas, for workforce development. It doesn't leave people out disappointed and disenfranchised, and includes them and helps them build their confidence on the way to achieving their four-year degree.”

Shipp said he will be working with student focus groups over the next few weeks, and he is pleased and honored to be in the Pittsburg community and looking forward to serving PSU.

“I'm kind of opening up a crack for all of you to see kind of where we're at,” Shipp said. “And thinking about a new model for achievement at Pitt State. I think it's important for students and families. Probably from my background, you can tell every hour of every day, all I think about is what we do and how it impacts students and families. We have to do better. Not just a little better. We have to do better. And we're going to.”