Pittsburg’s ArtWalk, ‘bigger and better than ever’ 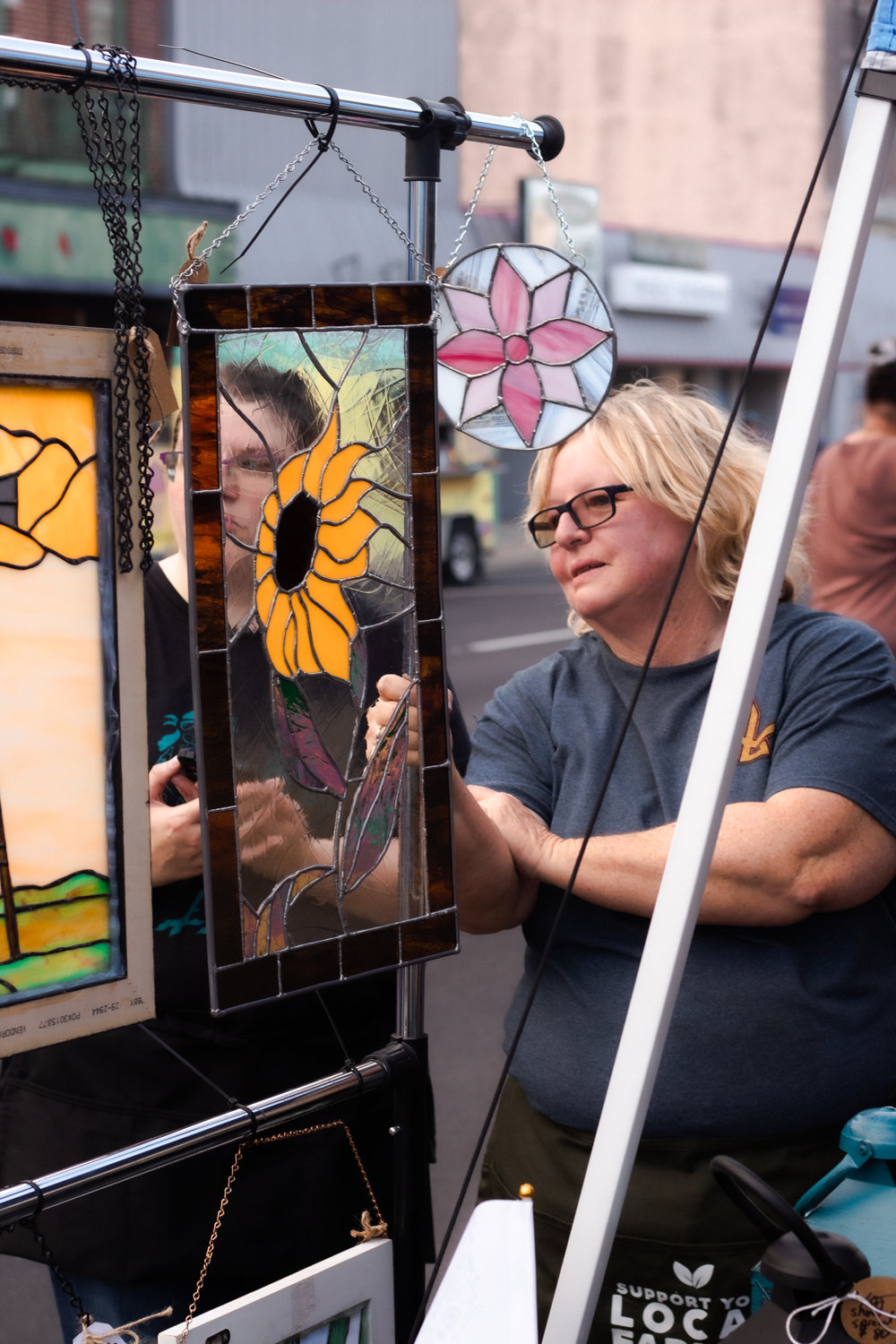 Rose Hopper discusses a piece of her glass artwork with an ArtWalk attendee on Friday.
MORIE PRICE / THE MORNING SUN 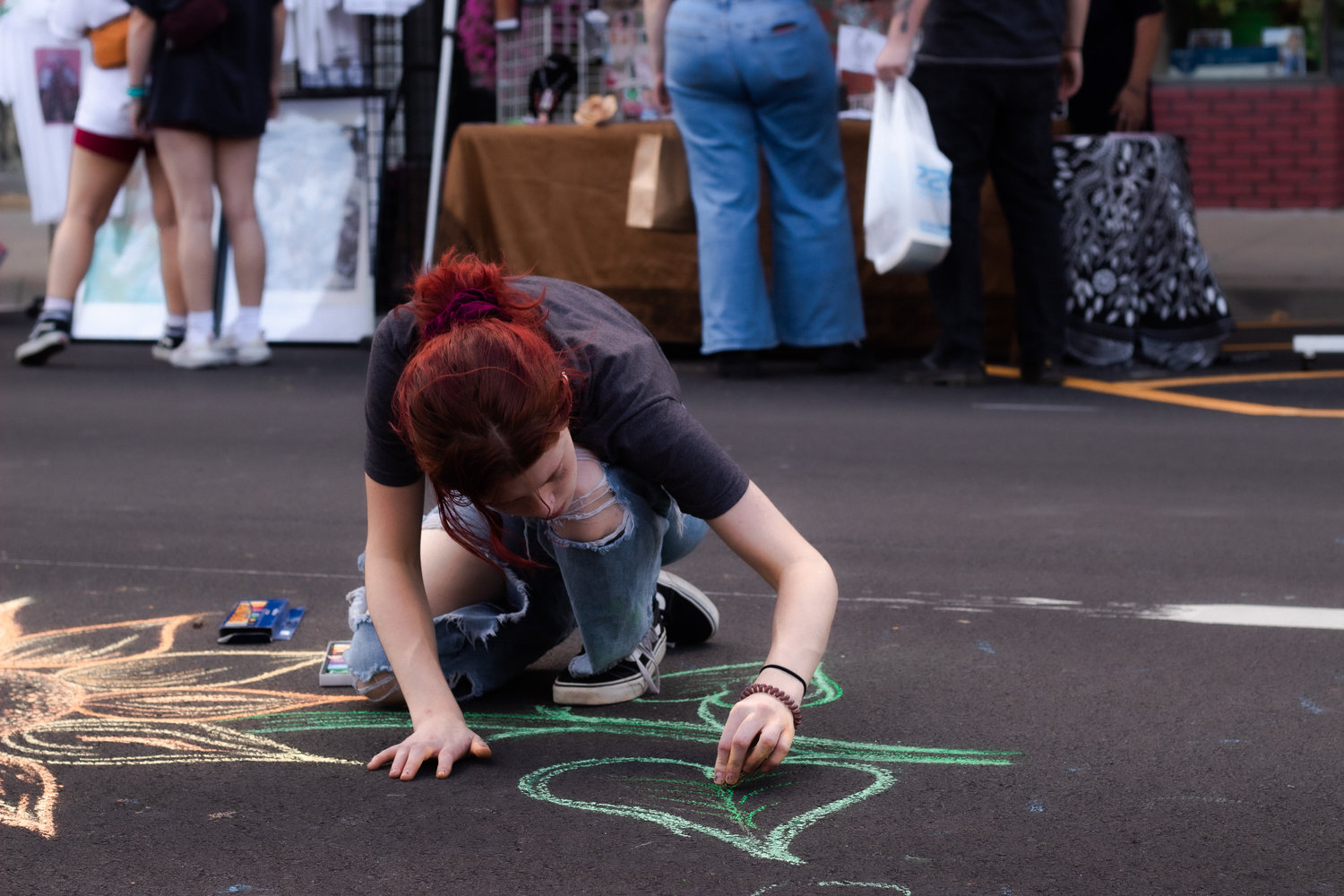 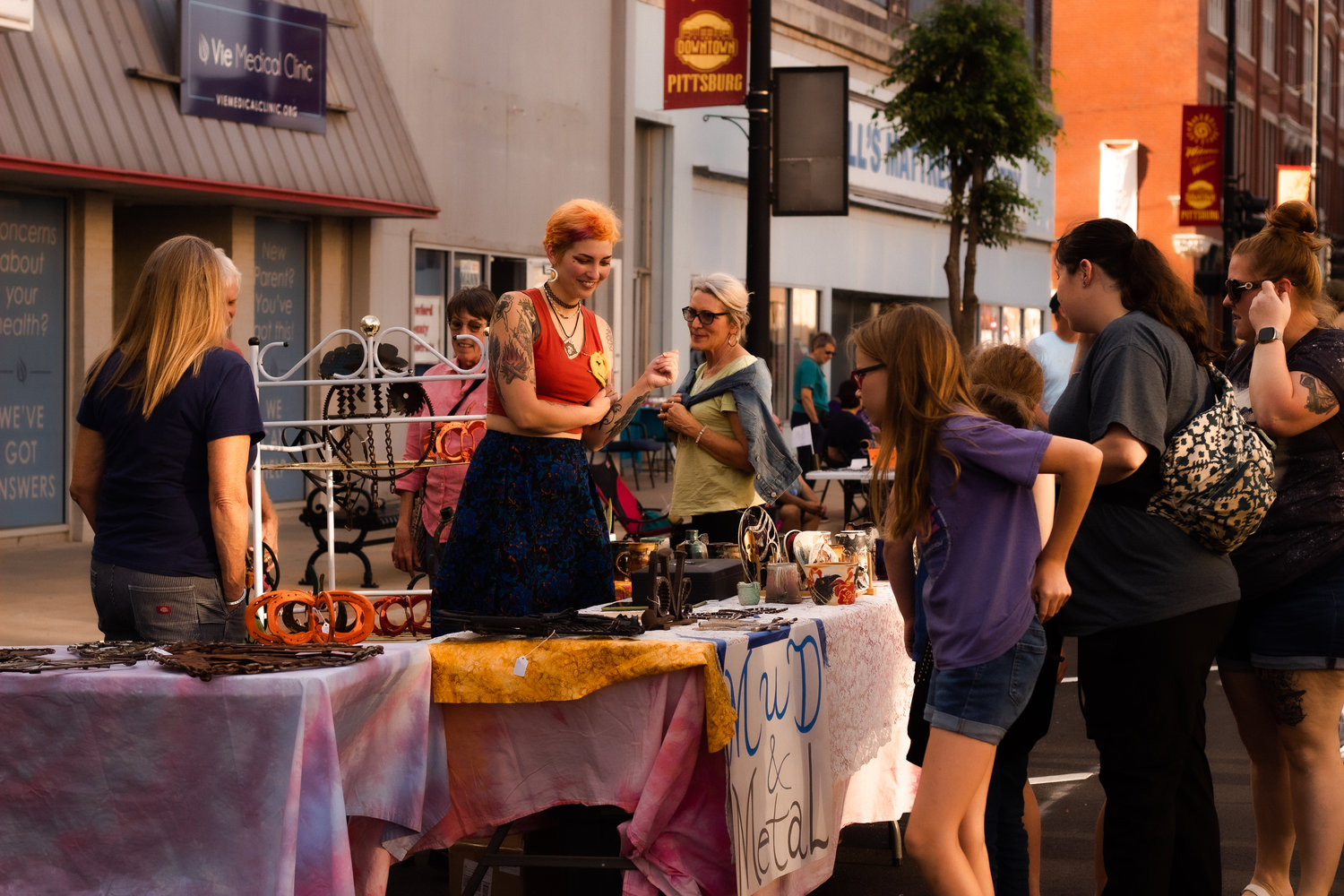 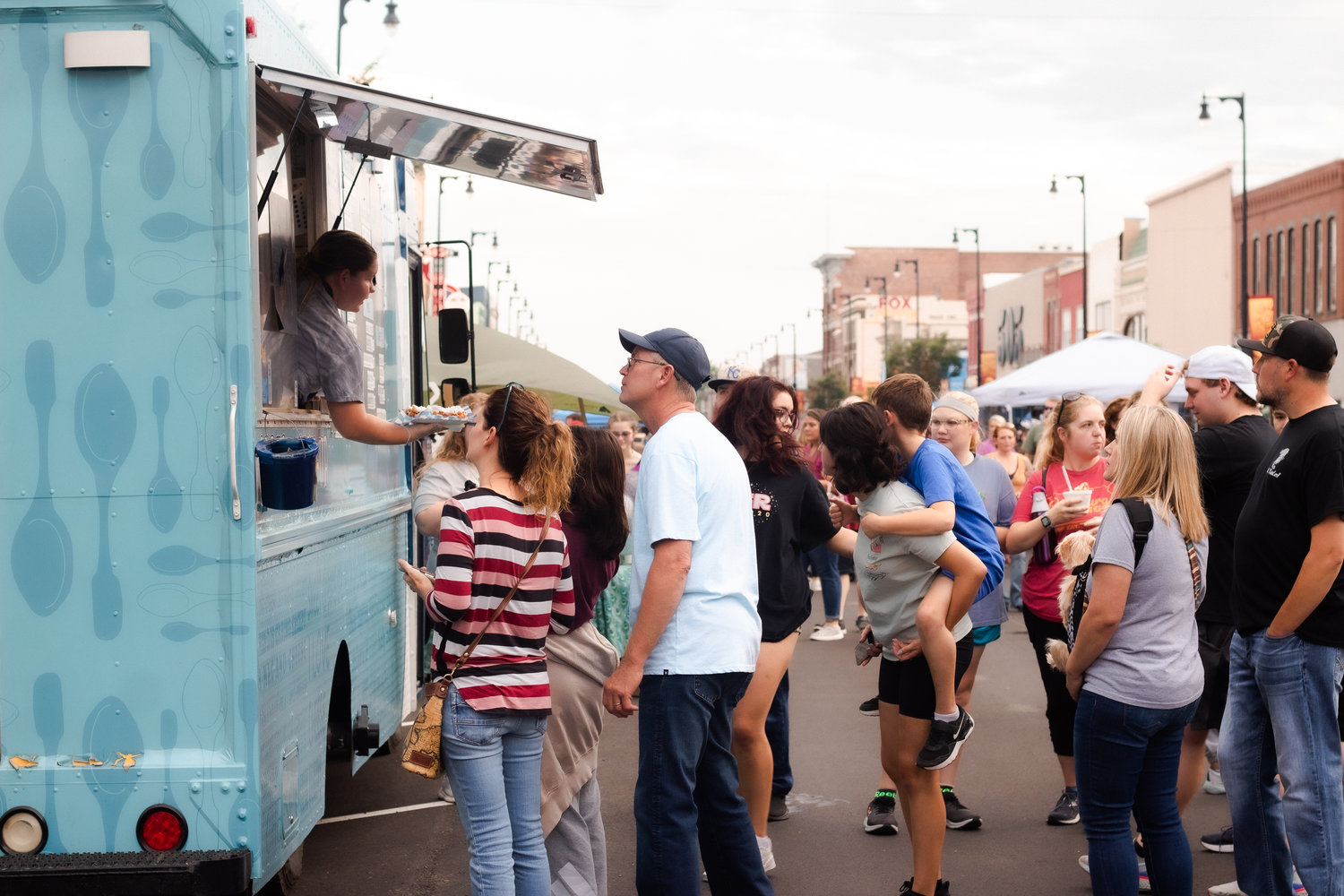 ArtWalk attendees wait in line at the Blue Spoon, one of the many food trucks at the Pittsburg ArtWalk on Friday. This season’s Artwalk featured over 20 vendors and organizations, and more than 50 artists.
MORIE PRICE / THE MORNING SUN
Previous Next
Posted Tuesday, September 27, 2022 3:00 am
By Morie Price / news@morningsun.net

PITTSBURG, Kan. — The Pittsburg community came together this weekend in celebration and promotion of local fine arts at the town’s semiannual ArtWalk. Having brought residents and local artists alike together since 2006, this season’s event featured more than 50 artists, and over 20 vendors ranging from food trucks to people selling plants, soap, wine, and various craft items. Crista Cunningham, Pittsburg ArtWalk Association president, compared the ArtWalk to the Super Bowl.

“I like to call this the Super Bowl for the artists,” Cunningham said. “So, they’re able to really come out and shine, maybe more so than they do just by selling their work online. A lot of people will be more apt to purchase art if they can see it and they touch it personally, versus online or on Etsy or whatever. So the benefit for these artists is that they have an opportunity to really make an impact by selling their artwork in a public setting versus an impersonal setting, such as online.”

Cunningham said she believes that people don’t know how much they like art until they see it in person, due to the emotion the art can evoke.

“When you connect with an artist and a piece of work that the artist has created, that’s a feeling I wish everybody on the planet could feel,” she said.

In the 16 years the ArtWalk has been held in Pittsburg, the event has had personal effect on local residents, such as Meg McCoy, local artist and musician. Participating in the previous ArtWalk in April with her band, Golden Girls, acted as a catalyst for their career.

“It was just the most effective way that we could share our music with the community and then we got to keep doing more and more of that,” McCoy said.

Along with her music, McCoy also brought her business “Fresh Prints” to the ArtWalk, featuring artwork of her own as well as other local artists. She said it’s a “symbiotic relationship” growing all of her forms of art.

“Art is a way to decorate space and music is a way to decorate time, so why would you leave one out? Get both of them. I think that’s the whole mission,” McCoy said. “So, yeah, if people enjoy my music they also get to support me further by purchasing my artwork, and then I get to make more music and more artwork and it’s wonderful.”

When the Pittsburg ArtWalk was first created by LaStacia Ross, Heather Horton, and Roger Horton in 2006, it was much smaller, with artists either inside business windows or on the sidewalks, Cunningham said. Over the years it has evolved into more of a festival. Overcoming hurdles during that time, such as coming out of the COVID-19 pandemic, Cunningham believes that the ArtWalk is “bigger and better than ever.”

“So, our purpose is to inspire, promote, and attract fine art to our community, and we want to continue to grow the culture that we have spent over 16 years developing by supporting artists in our area,” she said.

While the Artwalk is an opportunity to bring together community members and artists, for Whitney Snyder, Pittsburg resident, it is also a means of making Pittsburg more attractive to future residents.

“Just having more things to offer for Pittsburg,” Snyder said. “I think a lot of people have been moving to the area recently because there are a lot of businesses coming to town and I think that having events like this makes it a destination that people want to live and not just visit.”

McCoy said the Pittsburg community is “stronger together” and there are hidden treasures within the town, calling the ArtWalk “invigorating” for the residents’ lives. As a Pittsburg native herself, Cunningham had the opportunity to experience Pittsburg grow to embrace fine arts more over the years.

“I think that the fact that I live in a town where art is cool is probably one of my favorite and most proudest things about being part of this event,” she said.