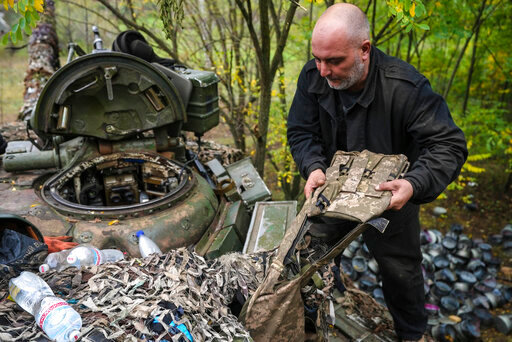 A missile strike has been carried out on the city of Zaporizhzhia, capital of the Zaporizhzhia region, parts of which are under Russian control and which has been illegally annexed by Moscow.

Russian forces fired some 10 S-300 anti-aircraft missiles at the city and two nearby villages, according to the presidential office. The strike destroyed a rehabilitation center for children with special needs; one person was injured. No casualties were reported in the villages.

Cities across the Dnieper River from the Zaporizhzhia nuclear power plant have also been shelled. In Nikopol, a frequent target of Russian shelling, power lines were damaged, as were a dozen residential buildings and private houses.

In the eastern Donetsk region, rescuers in the city of Chasiv Yar have been searching for survivors of the shelling that destroyed a college building and a dormitory. A missile strike also hit Kramatorsk, the city in the Donetsk region where some of Ukraine’s forces are headquartered. One civilian was killed in the region and nine more wounded over the past 24 hours.

In the east, Russian troops continued to attack in Bakhmut and Avdiivka, while Ukrainian forces pressed their counteroffensive deeper into the region. The Ukrainian governor of the Luhansk region, Serhiy Haidai, said Kyiv’s forces retook the village of Torske, just 20 kilometers (12 miles) away from the strategic city of Kreminna in the Luhansk region.

MOSCOW — The Kremlin says no final decision has been made on the territory two of the four regions it plans to incorporate into Russia.

Kremlin spokesman Dmitry Peskov said the Donetsk and Luhansk regions would joining Russia as defined by administrative borders that existed before a conflict erupted there in 2014. He noted that the issue of the borders of the two other regions – Zaporizhzhia and Kherson – remains open.

“We will continue to discuss that with residents of those regions,” Peskov said in a conference call with reporters.

Russian President Vladimir Putin signed treaties on Friday to make the four regions part of Russia in a move rejected by Ukraine and its Western allies. The lower house of Kremlin-controlled parliament is set to ratify the treaties Monday and the upper house will follow Tuesday.

Russia controls virtually all of the Luhansk region and about 60 percent of the Donetsk region that together makes Ukraine’s eastern industrial heartland of Donbas. In the south, Russia controls most of the Kherson region and a significant part of the Zaporizhzhia region.

Wallace said the virtual meeting has been called by the U.K. and the Netherlands. The force brings together troops from 10 countries, including the Baltic and Nordic nations, and has seen its importance increase since Russia’s invasion of Ukraine in February.

Wallace also said Britain will acquire two specialist ships to protect undersea cables and pipes, with the first “multi-role survey ship for seabed warfare” operational by the end of next year.

BELGOROD, Russia — Vyacheslav Gladkov, governor of Russia’s Belgorod region on the border with Ukraine, reported Monday that Ukrainian shelling of a village near the border killed a 48-year-old woman.

The shells, Gladkov said in a statement posted on Telegram, hit the center of the village of Golovchino, damaging several buildings. It wasn’t immediately clear if there were other casualties, according to the statement. ___ KYIV, Ukraine — Ukrainian President Volodymr Zelenskyy has hinted at Kyiv’s new gains in the southern region of Kherson.

In his nightly address Sunday, Zelenskyy noted the recent liberation of Lyman, a key Russian node for logistics on the front line in the northeast.

“The story of the liberation of Lyman in the Donetsk region has now become the most popular in the media — but the success of our soldiers are not limited to Lyman,” Zelenskyy said.

He then later thanked troops of from his hometown of Kryvy Rih near Kherson.

“To the soldiers of the 129th Brigade of my native Kryvy Rih, who distinguished themselves with good results and liberated, in particular, Arkhanhelske and Myroliubivka,” he said.

Those two villages are in same area southwest of the village of Novovorontsovka where Ukrainian troops have been making advances. ___ MOSCOW — Kremlin spokesman Dmitry Peskov says criticism of Russia's military leadership by Chechnya’s regional leader was driven by emotions.

Ramzan Kadyrov, the Kremlin-backed leader of Chechnya, scathingly criticized the Russian military command over the weekend, saying that the Russian retreat from the city of Lyman in eastern Ukraine was a result of incompetence and nepotism.

Kadyrov also called for the use of low-yield nuclear weapons in Ukraine to reverse the tide of the conflict in Russia’s favor.

Asked about Kadyrov’s statements, Peskov said they were driven by emotions.

“Even in difficult moments, emotions must be excluded while making assessments,” Peskov said in a conference call with reporters Monday. “We prefer to stick to well-balanced, objective assessments.”

Responding to Kadyrov’s comments on nuclear weapons, Peskov said conditions for their use are outlined in Russia’s security doctrine, adding that “there could be no other reasons” for their deployment.

___ Follow the AP’s coverage of the war at https://apnews.com/hub/russia-ukraine