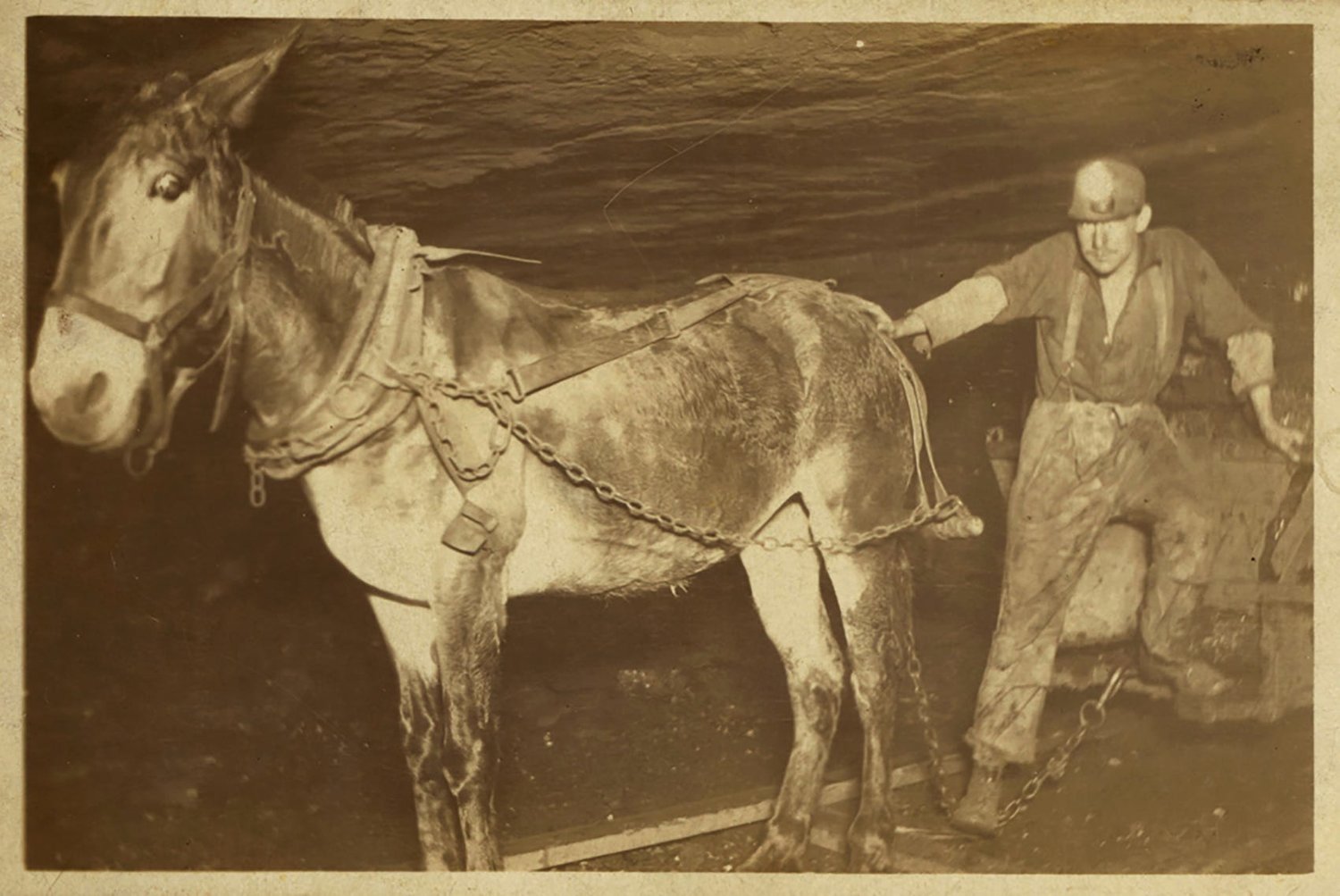 This week I’m sharing another excerpt from an autobiography by former Arma native Frank Louis Jeler Jr. This one brings to mind the oft-repeated local statement that mules were treated better by mine owners than miners, as miners were plentiful but it was difficult and expensive to secure and train a good mule. — J.T.K.

In his early years in the mines, my dad was a “driver.” At first, he drove teams of mules down in the mine to deliver empty coal cars and pick up full ones. Later, the mules were replaced with electric towing motors. He had more than his share of trouble with mean mules that made his job hard.

One day a mean mule pinned him against the entry wall. It broke both of his collarbones as well as one of his shoulders. He was taken to the hospital and my mother was called and informed that he had been hurt and in the hospital. She needed to bring him some clothes.

When he recovered after six weeks, he reported back to the mine. The mine boss asked him what he wanted to do now. He told the boss that he still wanted to be a driver. The boss was surprised but said okay. My dad then proceeded to pick out his new team of mules. He went around their pen and selected each and every one, all known to be mean. Everyone was surprised.

After getting them all below down in the mine, he proceeded to gather loaded cars until he had a full load of many cars. Underground, the narrow gauge rails followed the lay of the coal seam. There were raises and falls (slopes) in the lay of the tracks. Normally, on an uphill run, the team was pushed hard. On the down slope the team just had to stay ahead of the cars, which the driver was braking.

On the longest down hill run, my dad said that the brakes failed and the entire load picked up speed until the mules couldn’t stay ahead. They began to fall like dominos. The runaway train of loaded cars ground them into pieces. When the mine boss found out about this situation, he accused my dad of deliberately causing this.

My dad pleaded innocent to his accusations. However, he pointed out that they no longer had any more mean mules. Somehow, he got away with it. It must have been his sweet personality!

Miners were able to earn extra pay for loading extra cars. It was the driver’s responsibility to keep track of who was due to get an extra car. There might be 100 miners and 110 cars. On one incident, a miner, who was still in his room, yelled out to my dad that it was his turn for an extra car.

My dad told him it was not. An argument resulted and the miner threatened to kick my dad’s ass if he didn’t leave the car. My dad told him that he had better come out and get started because he was not going to leave an extra car. This man crawled out of his room ready to fight; however, as soon as he got completely out of the room it totally collapsed!

There were thousands of tons of rock where he had just exited. My dad said you couldn’t slip a sheet of paper underneath the pile. The miner told my dad to keep the extra car and all others in the future. He quit on the spot and swore that he’d never work another day in the mine.

About 20 years later, my dad and I were at the Arma Homecoming celebration in the city park. We had just ordered hamburgers and beers when a guy shouted out through the crowd to get dad’s attention. This guy told the person who took our order that he was paying for anything we wanted. He then told me that he owed his life to my dad over not getting an extra coal car a long time ago.

Another time back at the mine, there was a fire that burned down the shower and change house. The mine boss called my mom to tell her that she needed to bring my dad some clothes. She nearly fainted because she thought he was in the hospital again.