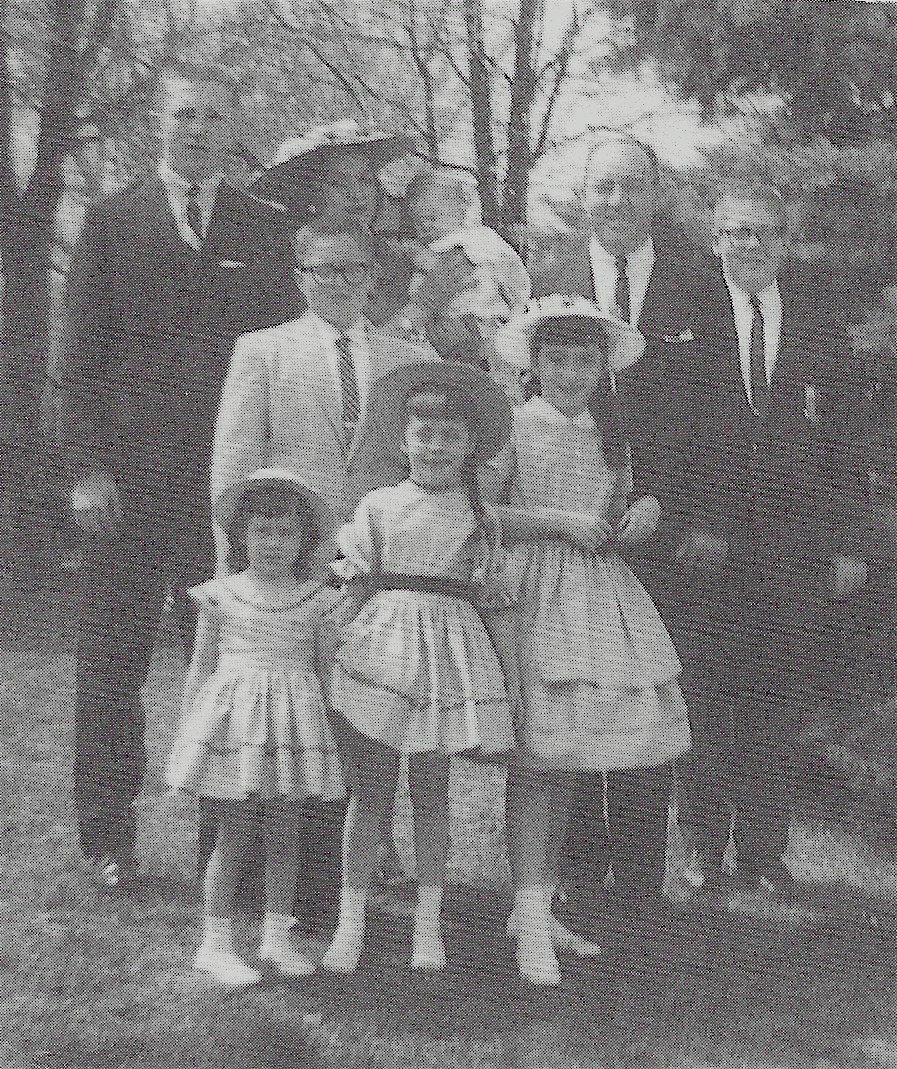 I have a grainy, black and white snapshot of my family, taken in 1961, that shows all nine of us dressed to the nines; Dad, my brothers and me in coats, ties and shined leather shoes; Mother in a large, flowered hat and earrings holding the baby; sisters in hats, dresses, white shoes, and anklets.

The photo was taken across from grandma and grandpa’s house, next to the blue spruce on Joe Saia’s front lawn. We’d driven the mile to their house in our two-tone ’55 Chevy after 10 o’clock Mass at Sacred Heart. My older brothers, Johnny and Stevie, took the window seats in back while my two younger sisters, Penny and Patty, crammed between them. I hung forward straddling the hump. Up front, between Dad, who was behind the wheel, and Mom, who held baby Billy, was sister LoRee.

For all I knew every family was like ours, aiming to the right along the highway’s spine to gather at their grandparent’s house by an evergreen, a dog barking somewhere in the distance, a passing scent on the wind, a shutter’s click.

Afterward, we went to eat at Otto’s Café in Pittsburg. We didn’t go out to eat much, so this was a real treat. And we were doubly hungry because we’d been fasting since midnight — as was then the Catholic requirement to receive communion.

I’m guessing, though, I might have sampled a colored Easter egg or bitten the head off one of my sisters’ chocolate bunnies after Mass. After all, I’d gotten up at 6 a.m. to fold and peddle my papers after hiding eggs for my sisters … so I was starved!

Otto’s was a slow food restaurant — packed with the aromas of everything from pancakes and bacon to ham and scalloped potatoes and fresh-baked pie — full of people who knew one another visiting from table to table.

People got dressed up to go to church even if it wasn’t Easter. No jeans, t-shirts, and tennis shoes. The cars had real chrome bumpers (front and back) and you could tell a Ford from a Chrysler from a Chevy. Many still had ‘three on the tree’ transmissions and a little button on the floorboard you pushed with your foot to dim the lights. Lots of people left the key in their car overnight.

Almost every public place had a jukebox loaded with everything from the oldies to top-40 hits. Six songs for a quarter. Many had pinball machines as well.

Going to “the show” at the Fox or Cinema in Pittsburg was a once-a-week ritual. Two showings a night of the latest movie. In 1961 the biggest hits were Spartacus and Psycho.

Although 33 rpm records and hi-fis were coming in, most of us bought the latest 45 single at Ernie Williamson’s or Woolworth’s and played them on a dinky portable player.

Snapshots were taken with the latest Kodak, then the film taken to a drug store to be sent off for developing. Could take up to a week.

No-iron shirts and dresses were just coming on the scene. Most households, like ours, had a sturdy ironing board and a heavy, stainless-steel iron (with an 8-foot cord) to press the wrinkles out of cotton garments. Also, a pop bottle filled with water with a stopper full of holes on the top to ‘sprinkle’ clothes as we didn’t have a steam iron. By 1961, with seven kids, my mother was farming out the ironing. Ten cents a shirt. I bet the starched dresses my sisters are wearing in the 1961 photo were twenty cents, though.

I have another Easter photo taken next to Joe Saia’s blue spruce. A color snapshot in which I’m a 17-year-old high school senior decked out in a sport coat from the trendy Guys Shop in Pittsburg. Next to me, in a simple white dress and pink shoes with bows, is 15-year-old Linda O’Nelio, later to become my sidekick, my accomplice in solving life’s mysteries.

As I gaze at it I find myself wondering if it’s actually us. Were we ever that young? In fact, the ethereal innocence in both photos is so delicate that it seems that if I were to touch them, they would dissolve in my hands, like the 55 plus years since they were taken.

Which brings to mind the opening line of one of the soaps millions of housewives took a lunchtime break to watch all those years ago: “Like sands through the hourglass … so are the days of our lives.”

J.T. Knoll, a native of the Republic of Frontenac, is a writer, speaker and eulogist. He also operates Knoll Training & Consulting in Pittsburg. He can be reached at 620-704-1309 or jtknoll@swbell.net.