In Lebanon, boat tragedy kills 89 but others plan to migrate 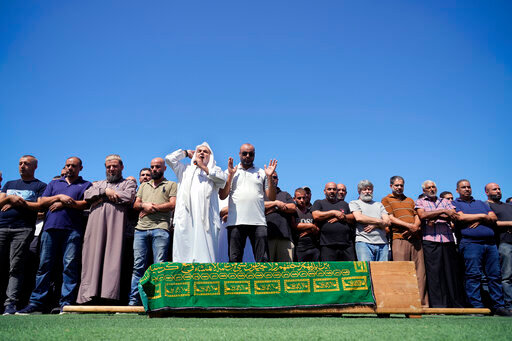 Mourners pray over the coffin of Palestinian Abdul-Al Omar Abdul-Al, 24, who was on a boat carrying migrants from Lebanon that sank in Syrian waters, during his funeral in the Palestinian refugee camp of Nahr el-Bared near the northern city of Tripoli, Lebanon, Saturday, Sept. 24, 2022. Thousands of Palestinians attended the funeral Saturday for one of the scores of migrants who lost their lives this week when their boat sank off Syria's coast. (AP Photo/Bilal Hussein)
Posted Saturday, September 24, 2022 8:59 am
By BILAL HUSSEIN and BASSEM MROUE

NAHR EL-BARED, Lebanon (AP) — Thousands of Palestinians held prayers on a small soccer field in a refugee camp in northern Lebanon on Saturday, to mourn one of the scores of migrants who died after their boat sank off Syria’s coast this week, even as others vowed to undertake the same perilous voyage.

Abdul-Al Abdul-Al, 24, kissed his father goodbye Tuesday before boarding a crowded boat leaving from a nearby town seeking a better life in Europe. It was his 14th attempt to flee the crisis-hit Mediterranean country, this time ending with the return of his dead body. He was to be buried in the camp where he was born, his father, Omar, told The Associated Press during the funeral procession.

The head of al-Basel Hospital in Syria’s coastal city of Tartus said Saturday that the death toll has reached 89, adding that of the 20 others who were receiving treatment at the medical center, six were discharged.

The Lebanese army announced Saturday that troops have detained the man who allegedly organized the deadly trip.

The incident was the deadliest so far as a surging number of Lebanese, Syrians, and Palestinians have been trying to flee Lebanon by sea to Europe in search of jobs and stability. In Lebanon, tens of thousands have lost their jobs while the the national currency has dropped more than 90% in value, eradicating the purchasing power of thousands of families and pulling three-quarters of the population into poverty.

Alongside 1 million Syrian refugees, the small country of Lebanon is home to tens of thousands of Palestinian refugees and their descendants. Many live in the dozen refugee camps that are scattered around the country. Palestinians suffer wide discrimination in Lebanon where they are deprived from doing specific jobs or own property and since the end of the 1975-90 civil war many have migrated.

After noon prayers were held at Nahr el-Bared, hundreds of people gathered in a yard used to play football where Abdul-Al’s coffin was placed in the middle. Prayers were held before the body was carried to a nearby cemetery where thousands of people had gathered to witness the young man being laid to rest.

Omar Abdul-Al said that his son had tried to leave Lebanon before but did not succeed as sometimes the migrant boats he took had technical problems or faced high seas. Sometimes he had to swim back to shore, the man said.

“We don’t want to live here anymore. We want to leave,” said Omar Abdul-Al, adding that he encouraged his late son to leave and now he is encouraging his four other sons to leave Lebanon. He added that his sons are all well educated but they cannot find jobs.

“We are passing through a severe crisis. There is no medication or bread or anything,” the father said. He added that many other Palestinians were planning to go on the boat but it did not fit more people.

Another relative of Abdul-Al screamed that “there is a disaster in Nahr el-Bared” saying that there are about 30 people missing from the camp who were on the boat. He said people are selling their homes and cars in order to go.

Several others have been buried since Friday.

There were conflicting reports on how many people were on board the boat when it sank, with some saying at least 120. Details about the ship, such as its size and capacity, were also not clear.

Residents in northern Lebanon say that people pay about $6,000 for an adult and $3,000 for a child to reach Europe.

At the morgue, Omar Abdel-Al said he found his son’s body “intact” though it was difficult to identify many of the dozens of other corpses kept there.

“Anyone that comes with a boat, people are ready to go,” he said.