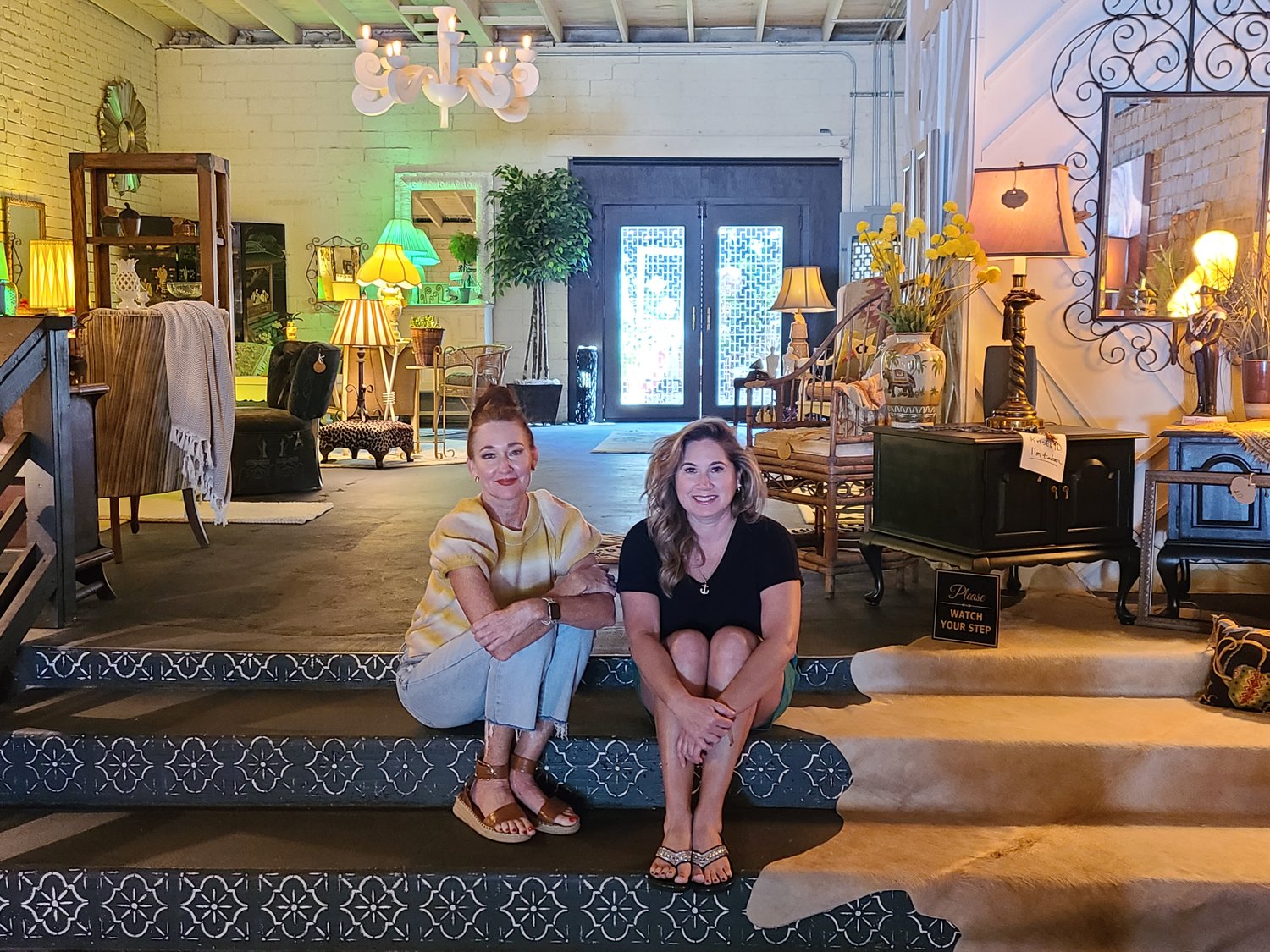 Owners of the White Elephant Emporium, Stephanie Beitzinger Watts, left, and Danielle Beitzinger are set for their grand opening this weekend.
ANTJEA WOLFF / THE MORNING SUN 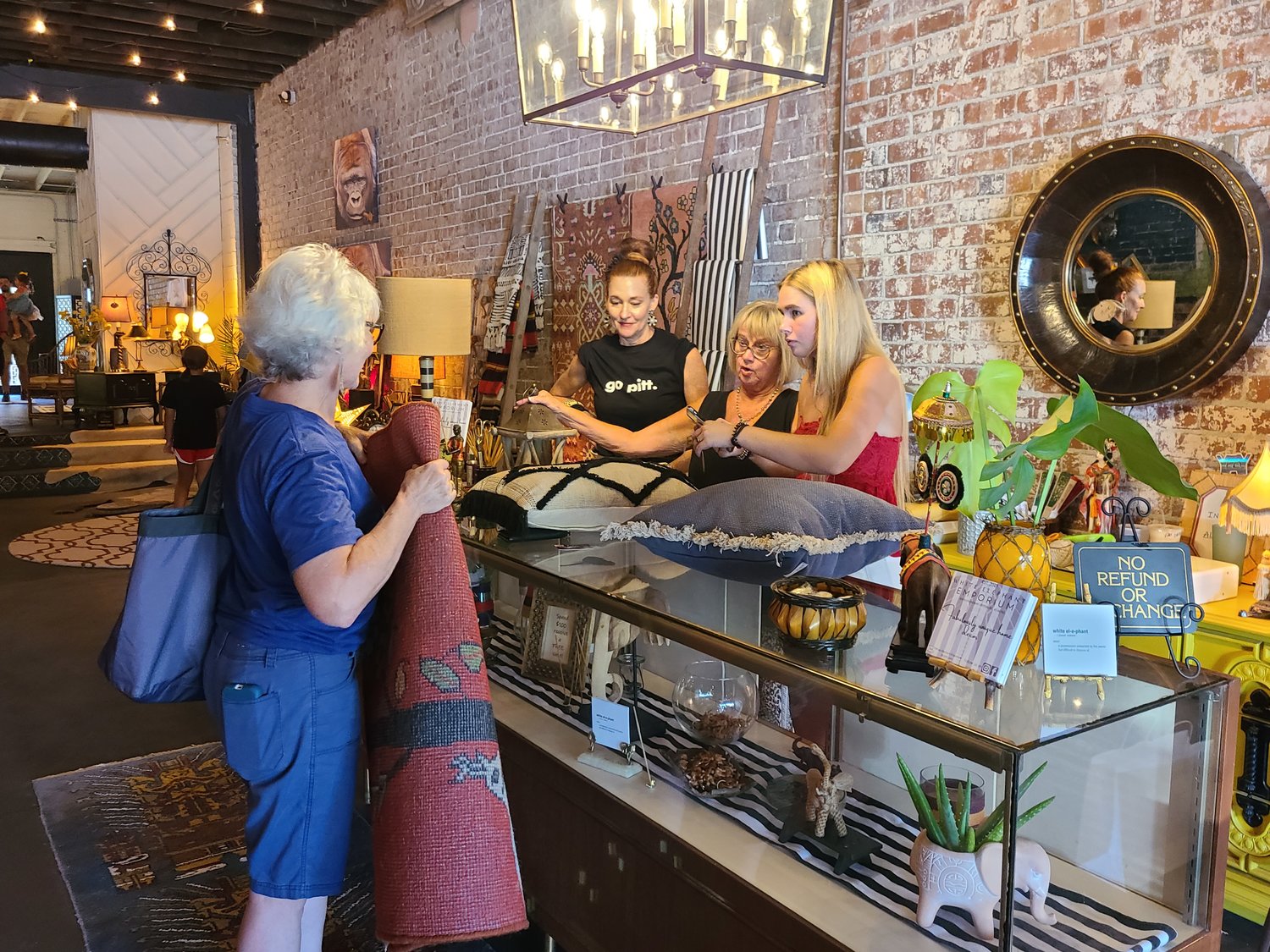 From left, Marlene Willis purchases a rug from White Elephant Emporium co-owner Stephanie Beitzinger Watts with the help of Sandy Jenkins and Sophia Beitzinger during the store’s soft opening on Sept. 17.
ANTJEA WOLFF / THE MORNING SUN
Previous Next
Posted Wednesday, September 28, 2022 3:00 am
By Antjea Wolff / awolff@morningsun.net

PITTSBURG, Kan. — After hitting some bumps and challenges along the way, two sisters-in-law with a passion for interior design have a permanent location for their dream and are set to have their grand opening this weekend.

When Danielle Beitzinger married Stephanie Beitzinger Watts’ brother, they quickly realized they both graduated from Pittsburg State University with the same degree: fashion merchandising. The two bonded over their love of visual interior design.

“Whenever we were together, we always talked about design, our homes,” Watts said. “That’s always the one thing we had hugely in common. And we’ve always complimented each other on our tastes.”

After Watts moved back to Pittsburg, and Beitzinger was living in Kansas City, they decided to showcase their talent for discovering and displaying unique home décor pieces by renting a booth at Paradise Mall, an antique mall in Pittsburg, and selling their cultivated collections.

When they had success with their booth, the two decided to expand to a bigger location, and moved into an old warehouse that was formerly owned by Beitzinger’s Hardware. They cleaned up the building and named their new business White Elephant Emporium in October 2021.

“The name of the White Elephant Emporium means we take stuff that nobody else wants and give it value again,” Watts said. “So it's the ultimate in recycling.”

Before their business hit its one-year mark, Watts and Beitzinger received notice that they had 30 days to vacate the warehouse. Watts said they debated on just walking away from the business altogether because they were so hurt. She said despite the fact the business was not open every day, they worked hard every day to make it a success. Watts said they were exhausted, especially since Beitzinger was commuting to Pittsburg from Kansas City up to four times a week. Watts said if it wasn’t for their customer base, they would have given up.

“They were like, ‘You can't close, we need you here in Pittsburg,’” Watts said. “So we weren't ready to stop.”

When the duo started looking into finding a space for their business on Broadway, they applied for and received a grant from the City of Pittsburg to help fix up a dilapidated storefront at 804 N. Broadway.

After 10 weeks of grueling work, much of which they did themselves, as well as challenges with contractors, Watts and Beitzinger were able to have their soft opening on Saturday, Sept. 17.

“Nothing gets in the way of a woman whose full-on desire is to succeed,” Watts said. “And that's pretty much how we were all summer. We did not take no for an answer. We learned how to pivot.”

“Every interior designer’s dream is to have their own place, secretly,” Beitzinger said. “I would say most do not get to achieve that.”

Watts and Beitzinger have debated on whether or not they will continue only being open the first weekend of the month, or if they will try opening every weekend throughout the fall and holiday season. Beitzinger said it can sometimes be hard since they are the only two people who work at the store, as well as finding unique products to sell.

“We innately enjoy the thrill of the hunt to find incredibly unique pieces to bring in here,” Watts said. “A lot of it could be a little considered wacky, but we also feel like it's something we're almost teaching our customers, teaching Pittsburg, to enjoy some of the design things that we enjoy as well.”

Watts said that despite many places having websites, she believes their focus should not stray from their physical location.

“You need to physically be in here and walk this to get the full-on effect,” Watts said. “And that’s what we’ve tried to prove.”

In addition to providing a shopping experience for the community, White Elephant will also be used as a teaching experience for one of the interior design classes at PSU in the near future. Watts and Beitzinger will be answering questions and giving a small talk as they show the students their choices for the space.

The two businesswomen have also considered ideas such as having live music play in the store or offering the space to be available for people to rent for meetings, bridal showers, or baby showers.

“I’m just looking forward to a new beginning,” Beitzinger said. “And being on Broadway, and just having our own place.”

“We’re going to be able to push the envelope a whole lot more here,” Watts said. “We own the building and we’re not afraid to do it. We’re going to do some fun things here.”

Watts said that the two of them have been told their whole lives how talented they were, but because they had husbands and were raising kids, they were only able to dabble in their design passions.

“Now we've taken this huge risk for ourselves,” Watts said. “And we do already feel like it's paid off. And we know and can trust that we do have the ability to do this because we show people our ability. We’ve never been able to show off our ability.”

“The two of us together, I think, are more powerful than either of us alone,” Beitzinger said.

“This is a store that she and I would want to go shop at,” Watts said. “And that's always been our goal.”