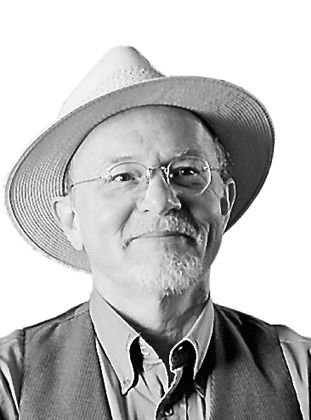 So said Kansas State College of Pittsburg graduate and Pulitzer Prize winning poet, James Tate. If that be true (and I think it is) three editors are coming to Root Coffeehouse tonight to share some poetry they’ve excised from the everywhere.

Jason Ryberg, Timothy Tarkelly and Mack Thorn will read from their work at Root tonight, May 21. Billed as “A Car Full of Travelling Poets,” and a rowdy bunch, they will take the stage at 6 p.m.

I’ve known Jason Ryberg for years as an editor and designer at Spartan Books, the publisher of my last two collections. He’s also a writer of short stories, screenplays, and poetry. One of his poems I like, titled “Wherein It Conquers the World,” begins every short stanza/observation with It or It’s, as in: “It’s the broom in the corner, / the tractor hibernating in the barn, / the glowing tip of the hermit’s cigar.” and “It’s the sun pooling on the tree line, / the blue moon in the window, / the classified section of a foreign newspaper / blowing along the docks in an icy grey wind.”

Mack Thorn hails from St. Louis. His poems remind me of those by my poet friend, Adam Jameson. This poem is titled “What Makes a Good Bar?”: “A good bar / like a good church / will be open / on Christmas eve / during a snowstorm / or most major holidays / when its parishioners / need shelter / and communion / but / a bad church / will turn off its lights / and close its doors / in the middle of / a hurricane.”

Tim Tarkelly has published several books of poetry. Most recently, he collaborated with visual artist Elena Samarsky on the book All Other Forms of Expression (OAC Books.) This poem, called “GALILEE”, begins with a biblical quote: “Simon Peter told them, I‘m going fishing. They said, We’ll go with you. They set out in a boat, but throughout the night they caught nothing. - John 21:3 CEB ‘Fishermen have always been philosophers / Just ask Peter, shoulders strong / From hauling nets, feeding / Mouths that too often chew without tasting / Never stop to see the sea / As a delicate platter of waves / Waiting for a hand / To gently pluck purpose / From even the hardest to reach places’”

These poets bring to town another variation of the energy that’s been mounting at Root since Andra and Brad Stefanoni took over last December, intending to build on what the Brumbaugh family started in 2015.

“A coffeehouse is such a diverse place. The demographic is everybody. You have older retired folks who meet here to visit, and to play cards and have coffee,” Andra said in a February Collegio article. “You have young people coming in to do studying or meet after school to get a quick snack, you have couples who might come by for a date, and it’s just such a diverse demographic that we serve — and that’s really cool.”

She went on to talk about their commitment to art and installations by local artists to highlight and sell their work, as well as provide space for workshops. The coffee shop resides on the first floor of one of the oldest buildings in downtown Pittsburg, once known as the Opera House Hotel. “We both love history,” Andra said. “We were married in Hotel Stilwell, which is another of Pittsburg’s most historic buildings.”

Andra and Brad’s philosophy is a mirror image of why Don Buche, Linda and I introduced the first coffeehouse in Pittsburg. This August will mark the 40th anniversary of the opening of the White Buffalo Café & Emporium in the Stilwell Hotel.

Besides coffee, tea, sandwiches and PICCO ice cream, we served something new to an assemblage much like the one that patronizes Root. People of a certain ilk who didn’t want to have to hang out in a bar to socialize, discuss politics, share ideas, experience art and poetry, and be entertained.

Indeed, part of the reason coffeehouses became so popular in England in the 17th century was because they promoted sobriety. Taverns became known as rowdy places for drinking and gambling, but coffeehouses were respectable establishments where men shared ideas and conducted their daily affairs. For a single penny, a man could gain admittance to a coffee shop and stay as long as he liked — there wasn’t an obligation to purchase anything. Which is why they came to be known as “penny universities.”

The White Buffalo also served as a venue for travelling singer songwriters, musicians, bands, and poets. We even had a harpist one Saturday afternoon.

There won’t be a harpist at the Root reading tonight, but Ryberg, Tarkelly and Thorn are likely to pluck some strings. Pull some, unravel some, weave some, tie some in knots. Cut some even.

In closing, here’s the ending lines of “Stopping by Woods on a Snowy Evening”, a classic by four-time Pulitzer Prize winner, Robert Frost, who said poetry could make you “remember what you didn’t know you knew.”

J.T. Knoll, a native of the Republic of Frontenac, is a writer, speaker and eulogist. He also operates Knoll Training & Consulting in Pittsburg. He can be reached at 620-704-1309 or jtknoll@swbell.net .