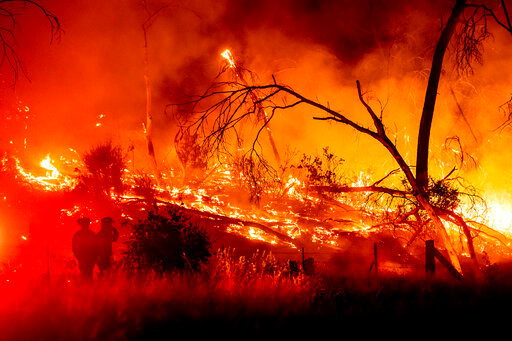 Firefighters battle the Electra Fire in the Rich Gulch community of Calaveras County, Calif., on Monday, July 4, 2022. According to Amador County Sheriff Gary Redman, approximately 100 people sheltered at a Pacific Gas & Electric facility before being evacuated in the evening. (AP Photo/Noah Berger)
Posted Tuesday, July 5, 2022 10:42 am

JACKSON, Calif. (AP) — Fourth of July revelers stranded by a wildfire in a mountainous California region that's a top tourist destination were safely evacuated, but the fire continued chewing through forests on Tuesday, officials said.

The Electra Fire at a recreation area that was packed with people, forcing 85 to 100 celebrating the holiday at a river to take shelter at Pacific Gas & Electric Co. facility, said Amador County Sheriff Gary Redman.

Evacuations were ordered in Amador and Calaveras counties.

Redman said the cause of the fire was not known, but that it started in the Vox Beach area of the North Fork Mokelumne River. He said that could suggest fireworks or a barbecue as a potential cause.

Vox Beach is about 55 miles (89 kilometers) east of Sacramento.

Several other small fires were burning in the state.