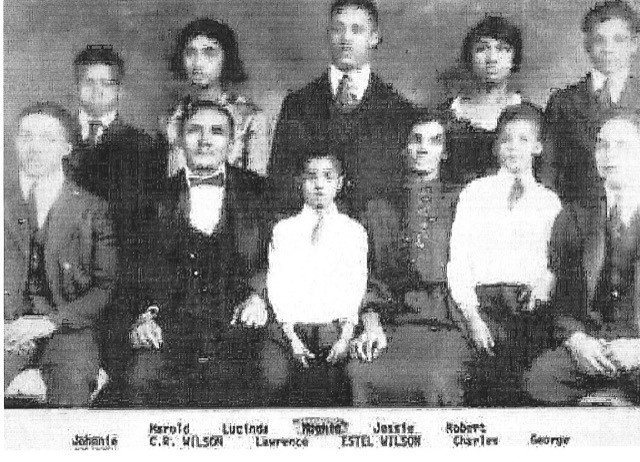 This week continues Laurence Wilson’s memoir with his school and pedaling papers experiences in Girard. — J.T.K

My first six years of grade school were spent at Lowell which was six blocks from our house on Summit. It was an easy walk to and from school. I remember many happy experiences walking to school with white students who lived in the same area such as: Keith Winger, Willard Mead and Ralph and Dave Shivner. And then there were my brothers and sisters: Harold, “Cin,” Jessie and Chuck.

These were happy times indeed. I especially remember one teacher Miss Whitehead. I liked her. She was nice and taught First Grade so my introduction to school was good. I also remember Miss Schwab. She was very strict, but still O.K. I do not know how it happened, but Girard was blessed with good teachers. From First Grade to high school I never ran across a poor teacher. My learning progressed normally. I was neither smart nor dumb somewhere between a “B” or “C” although the older I got I seemed to improve.

When I reached Sixth Grade I had to leave Lowell and go clear across town to Emerson. All sixth graders in town had to do this. To this day I do not understand why the only Sixth Grade in town was at Emerson. The other grade school in town was Whittier. Their sixth graders, too, had to attend Emerson. Emerson was O.K. The principal Mr. Davis was alright.

Seventh and Eighth Grades were junior high school which was housed inside Girard High School on Summit. Physical Education was a joy. We had an activity period and I joined a harmonica club and learned to play it fairly well. Sometimes, during the activity period, our homeroom teacher read to us and acquainted us with the world’s great art, music and literature. I remember being almost swept off my feet by these revelations. Her reading to us from Hansel and Gretel and The Silver Skates got me interested in reading.

I got a card at the library in town. It was quite a fine library for such a small town. The librarian, Miss. Carpenter, was a lovely woman who had been a former teacher. She was overjoyed to help you find books you wanted. I still have great interest in reading and have read all of the Great Books of the western world and hundreds of others.

On Saturdays my brother Chuck and I worked in white peoples’ homes doing a variety of indoor and outdoor tasks. We were paid $0.25/hr. for cleaning, beating rugs, washing windows, mopping floors, dusting furniture, weeding flower beds, mowing and raking leaves. We worked for Mrs. Hirtz and her daughter Faye, Mrs. Crawford, and others. I hated this work because time passed so slowly. Every one of these ladies preferred Chuck to me. They hired me only when Chuck was not available. I have never been able to understand that because I could work circles around Chuck. I was stronger and faster, and Chuck had a hernia causing him to wear a truss so he was on the puny side and a slow worker. But Chuck had a way about him of talking to those old white women. Part of the time he didn’t even work, but talked to them. Chuck was kind, considerate, sympathetic, and easy going. They just liked to have him around. Whereas I was all-business and hardworking and anxious to get done so I could leave. I learned something from that. It was that results are not always the most important thing, but how you get the result is a factor to be considered.

I carried the “Pittsburg Daily Headlight” an evening paper published in Pittsburg, Kansas which contained news about Girard. Marco Gatti was the distributor. He had a wooden leg and also operated a shoeshine parlor off the town square. He was a typical Italian.  He was never satisfied. I could easily see he had no love for Negroes even though he employed several in his shoeshine parlor. He and I got along O.K. He knew what I wanted and I knew what he wanted.

I never did like peddling papers because it was so confining. You had to be on your route every morning at 4:00 a.m. There were no excuses because nobody else could do your route but you. I rode my bicycle and it took about 1.5 hrs. I was captain of the carriers and counted-out the papers to four other paperboys. I was paid $2.50/wk. On Saturday morning I had to go all around my route collecting. It was $0.15/wk, for six days (no Sunday paper). Once Mr. Gatti and I got into an argument about collecting. If I knocked on the subscriber’s door on Saturday morning and the subscriber did not have the money, then I did not want to come back until the next Saturday. Mr. Gatti wanted me to stop-by each evening when I delivered the paper. This made the route much slower. I said I would not do it so he fired me. The first and last time I have ever been fired.

I came home and told my mother. She was angry thru-and-thru. She got on the phone and called Mr. Gatti and she read him the riot act. I mean she laid him out. He gave-in and agreed to hire me back. I have always marveled at how my mother got away with things like that.

One thing I have not been proud I did while pedaling papers was giving away a free newspaper to the white man who operated a stand on my paper route in exchange for a mug of root beer. Since I counted-out the papers to the other carriers I always had a few extras, so no one missed it. It was stealing pure and simple, but on hot days that root beer was so cool and refreshing with lots of foam on top which I liked very much until I could not resist making the trade.

Occasionally, I would also sell a copy of the paper to someone for $0.05 which I did not turn it. I rationalized these transgressions were so small that they would not jeopardize my chances of getting into Heaven.