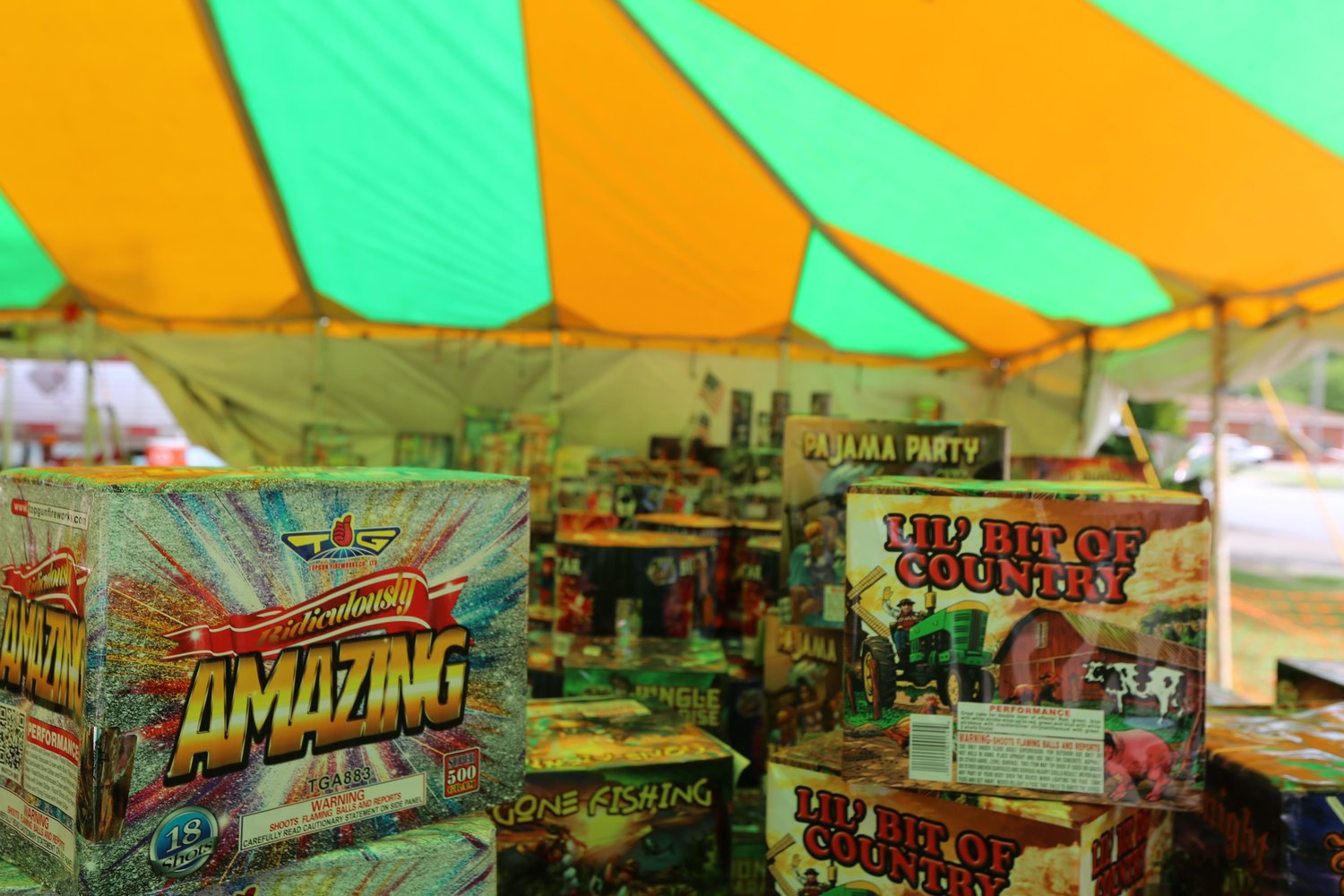 Officials are urging the public to only use fireworks sold at licensed tents, such as those shown here at the Kaboomers tent in Pittsburg, rather than buying black market fireworks or trying to make their own.
JORDAN MEIER / THE MORNING SUN
Posted Wednesday, June 30, 2021 1:59 pm
Jonathan Riley, Morning Sun

PITTSBURG, Kan. — Following an explosion this week at a home in the Kansas City suburb of Raytown, Missouri that left a man dead and three people injured, authorities are warning the public not to attempt to make their own fireworks, which they suspect as the cause of the detonation.

“Unfortunately, we’ve seen this before in Kansas City, way too many times,” said John Ham, spokesman for the Kansas City field office of the Bureau of Alcohol, Tobacco and Firearms (ATF).

“We lose fingers, we lose hands, we have fatalities every year that are — tragically — easily preventable,” Ham said. “Along with the state fire marshal and all of our local fire marshals every year we continue to say ‘Hey, you know, buy this stuff from the licensed tents.’ So we at least know that there’s been some quality assurance process.”

The man who died Monday night in the explosion in the basement of a Raytown duplex, and whose identity had not been confirmed or released as of Tuesday, is thought to have been attempting to manufacture illegal fireworks. The other three injured victims of the blast were also not identified Tuesday, although authorities said two of them were children.

“Fireworks are unstable by nature because when you light them, you want them to go off and explode,” Ham said. “And for somebody to try and make those themselves — either with mixing chemicals themselves or buying consumer fireworks and trying to take the powder out of those — unfortunately this can be the result.”

In Southeast Kansas, officials have issued similar warnings. “Never experiment with homemade fireworks or alter those purchased from a vendor,” the Cherokee County Sheriff’s Office said in a press release this week.

“Purchase high-quality fireworks from reliable and legitimate sources,” the City of Pittsburg website advises. “Don’t experiment or attempt to make your own fireworks”.

There have been two incidents in Pittsburg since the start of last year in which the Kansas Highway Patrol's Hazardous Devices Unit was called in to assist the Pittsburg Police Department, to remove and dismantle a “suspicious device” in one case and several “homemade explosive devices” in another, although there is no indication that these were illegal fireworks.

Although police clarified that the case last year involving “homemade explosive devices” was not terrorism-related, and that the “suspicious device” found near the Pittsburg State University campus earlier this year “did contain a small amount of incendiary components,” they did not release further details about the devices removed by the KHP. The PPD could not be reached by press time Wednesday to comment on those cases, or on the issue of illegal fireworks.

Crawford County Sheriff Danny Smith said, however, that while it would certainly be a problem if unlicensed amateurs were attempting to make their own fireworks locally, he could not recall any such incidents. He noted that unlike the City of Pittsburg, the county does not impose many restrictions on the use of fireworks and when they can be detonated in its unincorporated areas.

“You can pretty much set them off year-round,” Smith said. He added, however, that despite the lack of strict rules, most county residents limit their use of fireworks to holidays and special occasions.

“We never really have anything that’s unreasonable,” Smith said.