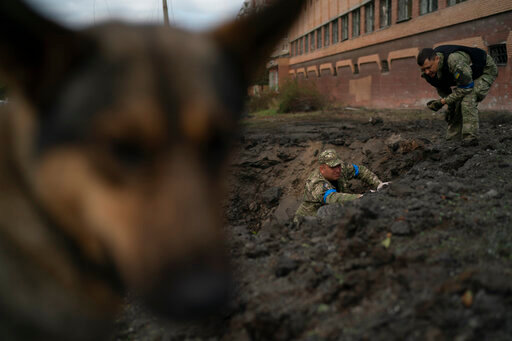 Ukrainian police officers collect fragments from a crater to determine the type of ammunition after a Russian attack in Kramatorsk, Ukraine, Thursday, Sept. 29, 2022. (AP Photo/Leo Correa)
Posted Friday, September 30, 2022 2:39 am

KYIV, Ukraine (AP) — A Ukrainian official says a Russian strike on the city of Zaporizhzhia has killed at least 23 people and wounded 28.

Zaporizhzhia Regional Governor Oleksandr Starukh made the announcement in an online statement Friday.

He said Russian forces targeted a humanitarian convoy heading to Russian-occupied territory. He posted images of burned out vehicles and bodies lying in the road.

Russia did not immediately acknowledge the strike.

It comes as Moscow prepares to annex four regions into Russia after an internationally criticized, gunpoint referendum vote as part of its invasion of Ukraine.

Starukh said those in the convoy planned to travel into Russian-occupied territory to pick up their relatives and then take them to safety. He said rescuers were at the site of the attack.