Russia to medevac wounded in school shooting to Moscow 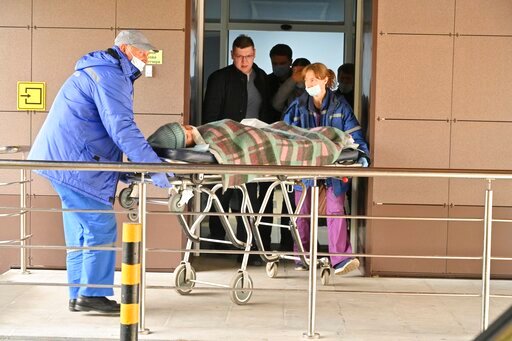 Medical staff carry an injured person on a stretcher at the emergency department of the First Republican Clinical hospital to evacuate to Moscow, in Izhevsk, Russia, Tuesday, Sept. 27, 2022. The plane of the Ministry of Emergency Situations will deliver victims of the shooting at school No. 88 in Izhevsk to Moscow hospitals. This was stated by the Presidential Commissioner for Children's Rights Maria Lvova-Belova. According to officials, 11 children were among those killed in the Monday morning shooting in School No. 88 in Izhevsk, a city 960 kilometers (600 miles) east of Moscow. (AP Photo/Dmitry Serebryakov)
Posted Tuesday, September 27, 2022 6:47 am

MOSCOW (AP) — More than a dozen people wounded in a school shooting in central Russia will be medevaced to Moscow for further treatment, authorities said Tuesday, a day after a gunman killed 17 people and wounded 24 others.

Health Minister Mikhail Murashko said that a medical evacuation is planned for 15 of the injured, including 13 children and two adults. He said three of them are in critical condition.

The shooting in Monday took place in School No. 88 in Izhevsk, a city 960 kilometers (600 miles) east of Moscow in the Udmurtia region, and was one of the deadliest school shootings in Russia. The gunman, a 34-year-old graduate of the school, killed himself after the shooting.

A shooter killed six people in a university in Perm a year ago. Just months before that, a gunman opened fire at a school in the city of Kazan, killing seven students and two teachers with a registered weapon. A student at a college in the Russia-annexed Crimean Peninsula killed 20 students and himself in 2018.

Russian authorities last year sought to tighten gun regulations in the wake of the shootings.

Russia’s Investigative Committee identified the gunman in Izhevsk as Artyom Kazantsev and said he was wearing a black T-shirt bearing “Nazi symbols.” No details about his motives have been released, and an investigation is underway. But local officials said he was registered as a patient at a psychiatric facility.

Kremlin spokesman Dmitry Peskov described the shooting as “a terrorist act” and said President Vladimir Putin has given all the necessary orders to the relevant authorities.

The school educates children between the first and 11th grades.

Izhevsk, a city of 640,000, is located west of the Ural mountains in central Russia.