Kentucky school shooter could walk free, or stay behind bars 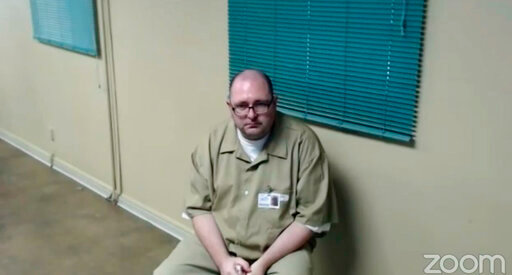 This screen shot from a Zoom video hearing shows Michael Carneal on Tuesday, Sept. 20, 2022 at Kentucky State Reformatory in La Grange, Ky. Carneal killed three students and wounded five more in a school shooting 25 years ago. He told a parole panel on Tuesday that he is still hearing voices like the ones that told him to steal a pistol and shoot into a crowded high school lobby in 1997. (Kentucky Parole Board via AP)
Posted Monday, September 26, 2022 8:44 am
By TRAVIS LOLLER

A Kentucky man who killed three fellow students and wounded five others when he was 14 years old should learn on Monday whether he will be released on parole or remain behind bars.

Michael Carneal, now 39, told parole board members last week that he still hears voices like the ones that told him to steal a neighbor’s pistol and fire it into the crowded lobby of Heath High School in 1997. However, Carneal said that with therapy and medication, he has learned to control his behavior.

Speaking by videoconference from the Kentucky State Reformatory in La Grange, he also apologized to his victims, including the entire tightknit community of Heath, just outside of Paducah. The students who were killed in the Dec. 1, 1997, shooting were 17-year-old Jessica James, 15-year-old Kayce Steger, and 14-year-old Nicole Hadley, who Carneal said was a “very good friend” to him.

Several of those wounded in the shooting and relatives of those who were killed also spoke to the parole board panel last week. Most expressed a wish for Carneal to remain in prison for life. Andrew Hadley, younger brother to Nicole, told the panel he does not understand why Carneal even has a chance at parole when his victims were "sentenced to a life of pain and suffering.”

He told the board how his sister used to drive him to excel both academically and athletically.

“She always wanted to strive to push us to be our best. And we’ve been missing that every day since she was taken from us,” he said. “I’ll never be able to touch her again, or hear her talk me through things.”

Carneal was a 14-year-old freshman when he opened fire on a before-school prayer circle that met in the lobby each morning. He was given the maximum sentence for someone his age at the time, a life sentence with a possibility of parole after 25 years. When the parole board meets on Monday morning, it could vote to release him, defer his next parole decision for up to 10 years, or order Carneal to serve out his full sentence.

Missy Jenkins Smith, who was paralyzed by one of Carneal's bullets and uses a wheelchair, watched him make his case for parole from her home in Kirksey alongside a friend who was also wounded in the shooting, Kelly Hard Alsip, and their relatives. The group expressed disbelief when they heard Carneal say he had last heard voices in his head a couple of days before, telling him to jump off the stairs.

Jenkins Smith had testified to the parole board the previous day that she thought he was too mentally ill to be released. She was concerned Carneal could become violent again if he stopped taking his medication or his medication stopped working.

“Continuing his life in prison is the only way his victims can feel comfortable and safe," she told them.

Asked about the shooting by the parole board, Carneal attributed it to a combination of factors that included his mental health and immaturity, but added that it was “not justified at all. There’s no excuse for it at all.” He said there are days that he believes he deserves to die for what he did, but other days he thinks he could still do some good in the world if he were released.