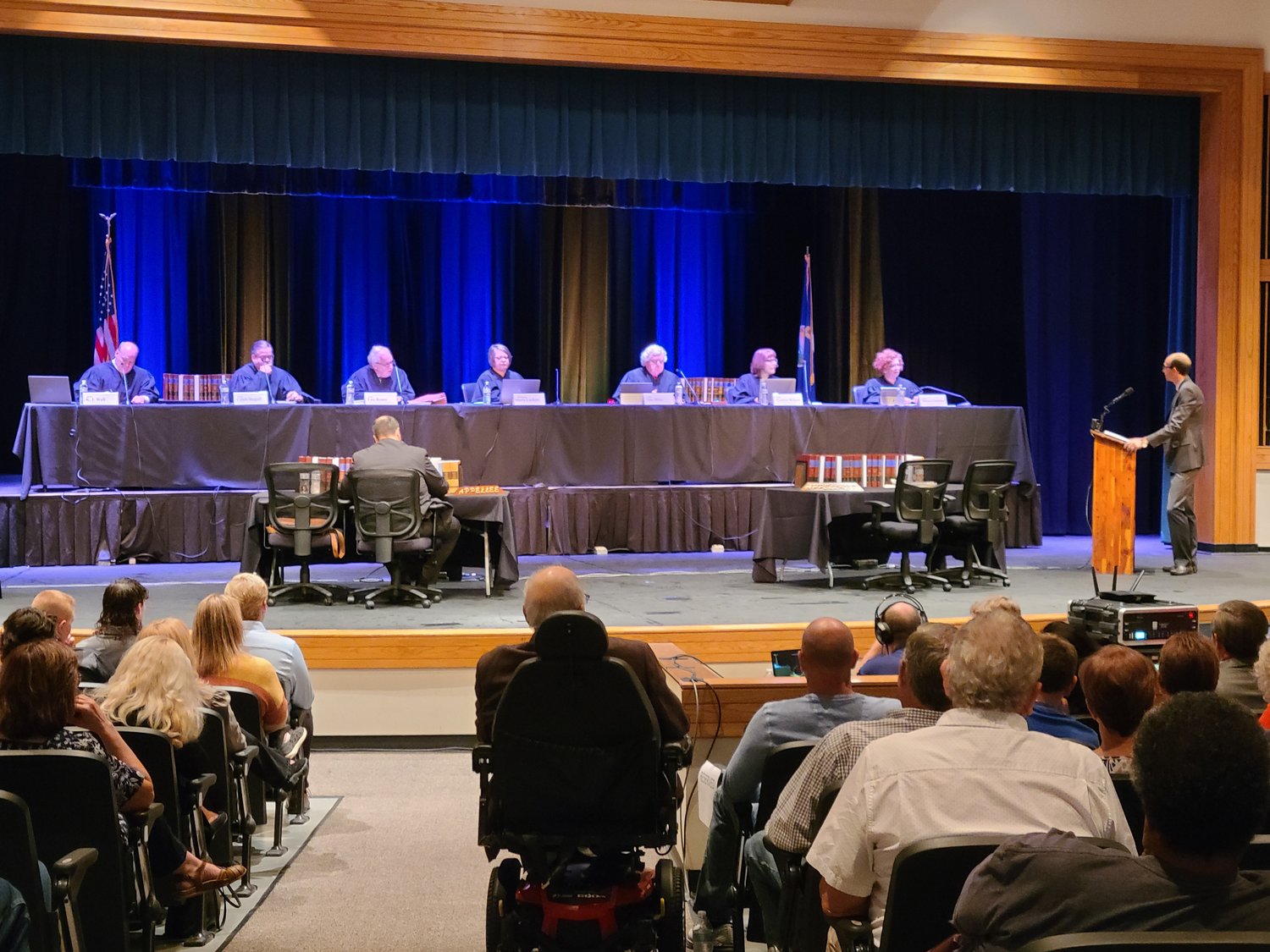 The Kansas Supreme Court hears an oral argument from the counsel for the appellant, Kasper Schirer, for the case State of Kansas v. Richard I. Moler II at the special session in the Parsons High School auditorium on Monday evening.
ANTJEA WOLFF / THE MORNING SUN
Posted Wednesday, October 5, 2022 3:00 am
By Antjea Wolff / awolff@morningsun.net

PARSONS, Kan. — Since 2011, the Kansas Supreme Court has been making the rounds traveling to different cities and towns across the state to give citizens a chance to see a docket session in action. On Monday evening, over 100 people were able to witness such a special session at the Parsons High School auditorium.

Th purpose of the Kansas Supreme Court’s journey throughout the state is to make its work more accessible to more people who would not be able to travel to Topeka to observe one of the court’s regular sessions. All of the procedures that happened in the Parsons auditorium mirrored those that take place in the courtroom.

The session featured two cases of appeals to be reviewed. The first was State of Kansas v. Richard I. Moler II and involved a jury convicting Moler of two counts of violating the Kansas Offender Registration Act due to the fact that he did not register two vehicles which he operated. Moler argued that the Kansas Offender Registration Act requirement to register a vehicle did not apply to him because he operated the two vehicles only once. This case was brought to the Kansas Supreme Court after Moler’s convictions were affirmed by the Kansas Court of Appeals.

The second case was State of Kansas v. Justin Burke Eckert, in which a jury convicted Eckert of aggravated kidnapping, aggravated battery, aggravated assault with a deadly weapon, criminal threat, cultivation of marijuana, and 25 counts of possession of drug paraphernalia. The issue to be reviewed was that Eckert argued that the drug paraphernalia charges were multiplicitous and there was a question as to whether a propane tank and blower could be considered drug paraphernalia.

After the oral arguments were presented and the justices asked questions about the cases, a small reception followed in the lobby, where attendees could meet the justices as well as talk about the session overall. The court did not make any final decisions on either case Monday.

Julia Finley, who saw information about the event in the newspaper, thought the session was very informative, and thought the Eckert case was the most interesting.

“It’s interesting you could take a general concept and breaking it down into whether you can charge for the whole thing or you break it up into a bunch of little pieces,” he said. “I really hadn’t thought about it that way.”

Michael Villarreal, a math teacher in Cherryvale, said that attending the session was an amazing experience.

“I seem to kind of geek out when it comes to being civically engaged,” Villarreal said. “It was just a great opportunity to see how our state’s Supreme Court operates, and the level of detail and care they provide to decisions that they make. It was just a really cool experience.”

Villarreal said he was really pleased that the cases were relevant to local communities.

“I really appreciated what could be described as brutal honesty and how up front the justices were for trying to cut through the rigmarole and the dressed-up responses from the attorneys,” he said. “They really wanted to get to the brass tacks of what arguments are being posed so they could make a decision.”

Government teacher at Independence High School Spencer Weaver said it was great to see the Kansas Supreme Court in action.

“The cases were both interesting in terms of their complexities,” Weaver said. “The two things I took away is the use and definition of words and language, and what is the intent behind the legislation and interpreting that and figuring that out is the challenge of law itself and lawyers and the courts. That’s something I talk about in my class is that all laws are subject to that interpretation. And so that’s what we saw here tonight.”

Weaver said he was happy to see 15 of his students at the event because he told them it was a unique opportunity for them.

One of Weaver’s senior students, Alaura Boland, said she has been interested in true crime so she enjoyed the points that were brought up in each case.

Another senior, Logan Rathbun, said he was expecting it to be about boring government stuff and not interesting at all, but he ended up finding it all intriguing.

“The way they argued back and forth about the smallest stuff was something I was not expecting,” Rathbun said.

Senior Devon Mitchell said that since he was considering either being an English teacher or a lawyer as a future career, it was good for him to see a real court case, and to see the way court proceedings work.

Weaver said he was looking forward to hearing the final opinion of the justices for these cases.

“I definitely felt in each case one side seemed to be better argued than the other,” he said. “And I’ll be really curious to see how the court weighs in on it, and how they interpret it.”

Decisions made by the Kansas Supreme Court are posted on the Kansas Judicial Branch website as soon as they are released. People may see these decisions as well as watch live streamed sessions at kscourts.org.