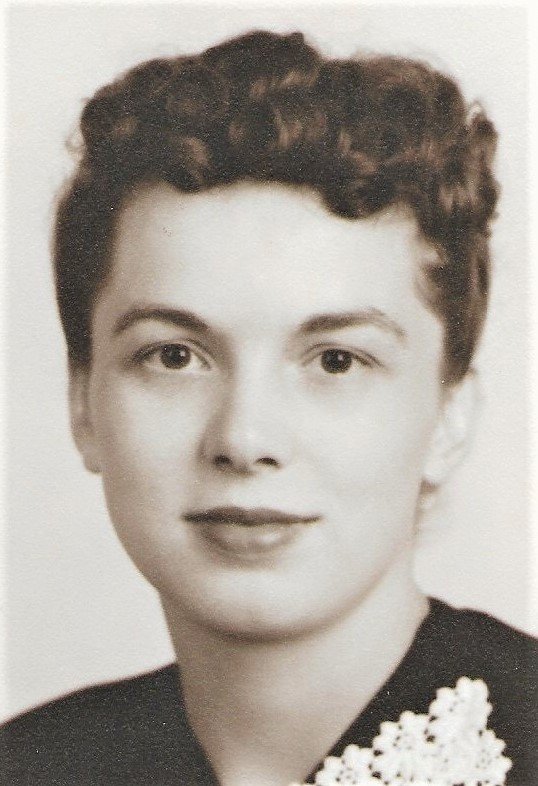 Jo Maxine Fowler Ferraro of Nevada, Missouri, died the early evening of July 4, 2022, at the age of 102. Her personality and her life well-lived were fitting with the sparklers and bright stars of our Nation’s Birthday Celebration that night.

Jo was born on March 2, 1920, to James T. and Ada Davenport Fowler in Arcadia, Kansas. She was one of seven brothers and seven sisters in the Fowler Clan. Jo graduated as the Salutatorian of the class of 1938 from Arcadia High School. She often spoke of the many opportunities a small-town school offered to whoever wanted to participate, and participate she did. Starting her freshman year, Jo was voted Coal Queen. She was in the school band for four years and became the Drum Major her senior year. She sang in the mixed quartet, performed in one-act plays, and won Declamation trophies yearly. Jo worked for honor roll grades all four years and served as senior yearbook editor. Jo played on the tennis team and the fiercely competitive volleyball team. She often proudly recounted how her volleyball team would pack the stands in that small Arcadia gymnasium. Her high school career culminated with her award as the Outstanding Senior Girl.

When money for college was scarce in a family as large as hers, Jo learned the banking business from her father, James Fowler, at the Arcadia Home State Bank. Undeterred, Jo journeyed to Tulsa, Oklahoma, with her sister, Peachy, and worked for Oklahoma Public Service. Shortly thereafter, she married her childhood sweetheart, Victor Ferraro, from Mulberry, Kansas, on Nov. 7, 1942, in Budd Parks Christian Church in Kansas City, Missouri. In a recently found note from Vic to Jo on the occasion of their 60th Wedding Anniversary, Vic wrote, “I love you, and always have since you were fourteen years old.”

Together with Vic and their four children, Jo lived a full life of family, overseas living, and travel. From Bartlesville, Oklahoma, and through Vic’s engineering projects with Phillips Petroleum Company, from the years 1961 to 1978, they lived in Sao Paulo, Brazil; Salvador-Bahia, Brazil; Madrid, Spain; and Middlesbrough, England. In each foreign country, Jo learned the languages, the cultural ways of life, and — although giving up her daily American ways — acquired a broadened, worldly outlook that she passed on to her children. With each move, she created a home for her husband and her family, rich in new experience. Jo was a woman of deep faith, always active and serving in her church community. Regular Sunday attendance for her family was the consistent routine.

After a short stint in Houston, Texas, and Columbia Lakes, Texas, Vic retired from Phillips, and he and Jo settled in Nevada, Missouri, in 1993, close to their southeast Kansas roots. Throughout her many travels, she remained proud of her Fowler family and Fowler heritage.

Jo enjoyed playing bridge and golf. She was active in the First Presbyterian Church, Presbyterian Women, Chapter KK PEO, and a charter member of her Eastern Star group. Up until her death, Jo was the only living member of her class of 1938 and the oldest member of the Arcadia Alumnae Organization. Jo was a glorious cook, learning to bake her mother Ada’s roasts and pies, authentic Italian spaghetti from her mother-in-law, Grace, and various Brazilian and Spanish dishes. In her

later years, she continued to enjoy her adult children, her grandchildren, her great-grandchildren, and great-great-grandchildren. Known as “Mama Jo” by them, this term of endearment was also adopted by many Nevada friends and residents. Mama Jo loved to shop a sale and forever dressed more stylish than her age. She was a knitter, a needle-pointer, a feeder of birds, stray dogs, and wild critters — always busy, never idle — and acquired a vast library of books to read. Family trips and family celebrations were observed often. She remained grateful for good health that allowed her to live at home beyond her 100th birthday, a joyous centennial birthday celebration together with Fowler and Ferraro family.

The family thanks God for Jo’s long life, and we pray that God may strengthen us to entrust her into His arms of eternal love and mercy. We also thank the staff of Arma Health and Rehab for their compassionate care of Jo these past eighteen months.

Funeral services for Jo will be at 11 a.m. Monday, July 11, at First Presbyterian Church, 500 North Olive, Nevada, Missouri, with the Rev. Laura Agee officiating. Burial will be at the Garden of Memories Cemetery in Pittsburg. Family will receive friends from 10 a.m. to 11 a.m. Monday at the First Presbyterian Church in Nevada prior to the funeral services. Friends may also call at the Bedene Funeral Home on Sunday from 11 a.m. to 4 p.m. Arrangements are under the direction of Bedene Funeral Home, Arma.

Memorials may be made to First Presbyterian Church and sent to Bedene Funeral Home, P.O. Box 621, Arma, KS 66712