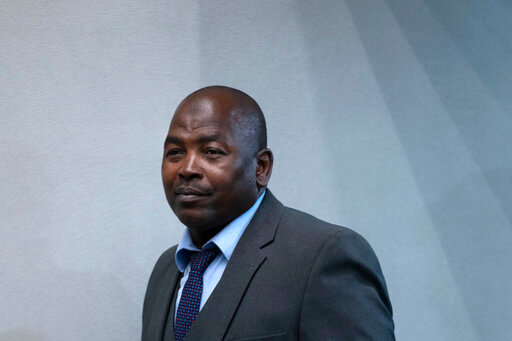 THE HAGUE, Netherlands (AP) — An alleged senior leader of a predominantly Muslim rebel group that ousted the president of Central African Republic in 2013 pleaded not guilty Monday to seven counts of war crimes and crimes against humanity at the International Criminal Court.

After a court officer read out charges including torture, unlawful imprisonment and persecution, Mahamat Said told a three-judge panel: “I have listened to everything and I am pleading not guilty.”

Said, 52, is accused of running a detention center in the capital, Bangui, called the Central Office for the Repression of Banditry, from April to August 2013 where he and dozens of Seleka fighters allegedly held prisoners perceived as supporters of ex-President Francois Bozize in inhumane conditions and subjected them to torture and brutal interrogations including whipping and beating them with truncheons and rifle butts.

The court's chief prosecutor, Karim Khan, told judges that his team would prove Said's guilt at a trial that is expected to last months.

“By the end of this trial, you will be convinced that in relation to all seven counts Mr. Said will be found guilty,” Khan said.

Fighting in Bangui in 2013 between the Seleka rebels, who seized power from Bozize, and a mainly Christian militia called the anti-Balaka left thousands dead and displaced hundreds of thousands more.

The Hague-based court has also detained two alleged commanders of the anti-Balaka, Alfred Yekatom and Patrice-Edouard Ngaïssona, who are standing trial together.

“For 10 horrendous months, the Seleka ruled Bangui," Khan said. "To say they governed would be an abuse of the English language. They ruled by diktat, by fear, by terror.”

Khan said the name of the detention center was a misnomer.

“This was no office to repress banditry. This was no location to assess any criminal conduct," he said. "This was a torture centre designed as such to spread terror, hardship and pain.”